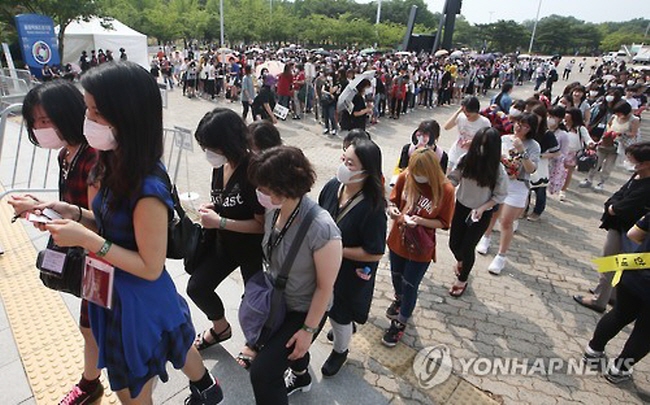 A concert guide at the gymnasium said that no one with an elevated body temperature was detected during the two days of the concert. (image: Yonhap)

SEOUL, Jun. 15 (Korea Bizwire) — TVXQ fans cheered through their masks at concerts on June 13 and 14, where concerns over the MERS virus were moderated by organizers who used thermal imaging cameras to check body temperatures at various times during the shows.

The two-day concert raised concerns over the further spread of the MERS virus among 24,000 fans, including international citizens from Japan, China and Several South Asian countries who had booked tickets for the concerts.

However, MERS couldn’t stop fans from seeing the last concert of TVXQ before U-Know’s enlistment in the army.

Few tickets were canceled, and the canceled tickets were quickly snapped up by other eagerly waiting fans. Almost every seat at the Gymnastics Gymnasium in Olympic Park was occupied.

Non-toxic sterilizer was sprayed over several routes that fans used to walk down to the gymnasium on the concert day.

They could directly enter the gymnasium without queuing, as SM Entertainment did not operate any sale booths for TVXQ-related goods outside the auditorium.

Hand sanitizer was everywhere, and the number of medical staff at the scene was five times higher than usual.

A concert guide at the gymnasium said that no one with an elevated body temperature was detected during the two days of the concert.

SM Entertainment also said that the stage, seats, lobby and backstage were thoroughly sterilized for more than three hours every day.