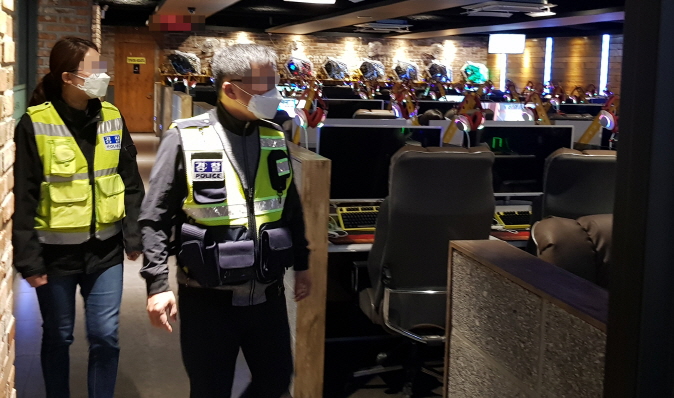 According to the Central Disaster and Safety Countermeasures Headquarters, local governments across the country have taken an administrative guidance action for 3,482 religious and entertainment facilities and call centers that were found to be in violation of anti-COVID-19 guidelines in recent on-site inspections.

Of them, 454 facilities — 442 religious facilities and 12 sports facilities — where violations were deemed serious, were put under an administrative order to abide by anti-infection guidelines, such as fever checks for all visitors, 2-meter distances between people, bans on group meals and the appointment of quarantine managers, the agency said.

The central disaster headquarters launched a social distancing initiative over the weekend, asking religious, sports and entertainment facilities, all seen as places where cluster infections are particularly likely to occur, to temporarily suspend operations until April 5 to help curb the coronavirus outbreak.

Violators of the administrative order will face a fine of up to 3 million won (US$2,400) and a suspension of business.

In a relevant move, meanwhile, the provincial government of Gyeonggi, which surrounds Seoul, on Tuesday began on-site inspections of all public-use businesses to examine whether they are observing its administrative guidelines for preventing the coronavirus outbreak.

According to the Gyeonggi government, teams of civil servants, including police officers and firefighters, will visit all internet cafes, karaoke rooms, clubs and other entertainment businesses frequented by the public until April 6 to check on their implementation of its special administrative order issued last Wednesday to help curb the spread of COVID-19.

It noted a total of 15,084 businesses in the nation’s most populous province — 7,642 karaoke rooms, 7,297 internet cafes and 145 clubs and club-like establishments — will be inspected for anti-infection purposes.

“A nationwide campaign for social distancing will be under way until April 6. Active cooperation is needed from the concerned places of business to overcome the coronavirus crisis early,” a provincial official said.

Quarantine authorities have advised against visiting internet cafes, karaoke rooms and clubs, where confined spaces may increase the risk of virus transmissions through droplets.

Gyeonggi’s administrative order imposed a set of seven guidelines on such establishments, instructing them to designate quarantine managers, have all employees and customers wear face masks, ban the entry of people with fever or respiratory symptoms, list all visitors and their contact numbers, conduct hand disinfection for all visitors and maintain maximum distance between customers.

The Gyeonggi government issued a similar administrative order for about 140 Protestant churches last week after a string of cluster infections occurred at churches, internet cafes and other places of business in the capital area.

COVID-19 has infected 9,037 people in South Korea as of Tuesday morning, with Gyeonggi Province and Seoul accounting for 366 and 334, respectively.