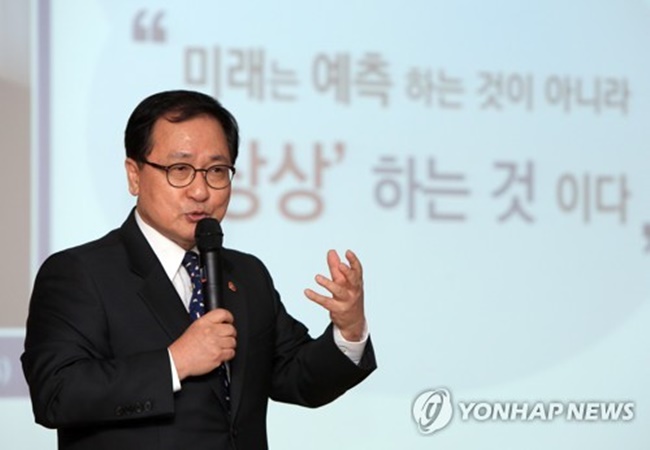 “The fourth industrial revolution is both a crisis and opportunity forthe country that relies on people as its main resource,” ICT Minister You Young-min said during a forum held in the southern resort island of Jeju. (Image: Yonhap)

“The fourth industrial revolution is both a crisis and opportunity forthe country that relies on people as its main resource,” ICT Minister You Young-min said during a forum held in the southern resort island of Jeju.

Finding new growth engines for the South Korean economy through the fourth industrial revolution is one of the key policy objectives charted out by President Moon Jae-in, as the country as a whole is overly reliant on the manufacturing sector.

“An era of the fourth industrial revolution is a smart world,” the minister said, noting that various technologies will alter every facet in totally different ways.

The transformation will be unlike anything humankind has experienced before and that the change must be integrated and comprehensive, involving all stakeholders, the policymaker said.

“Cutting-edge technologies such as the Internet of Things (IoT) is leading to an Internet of Everything (IOE) that connects everything, including human beings,” he said.

He also said the country should thoroughly prepare for relevant policies as it adopts fifth-generation (5G) network infrastructure by 2018.

The 5G network is expected to be 1,000 times faster than the existing long-term evolution (LTE) service, allowing users to download an 800 megabyte movie in one second, compared with the 40 seconds that it currently takes on the LTE-Advanced network, currently billed as the world’s fastest.