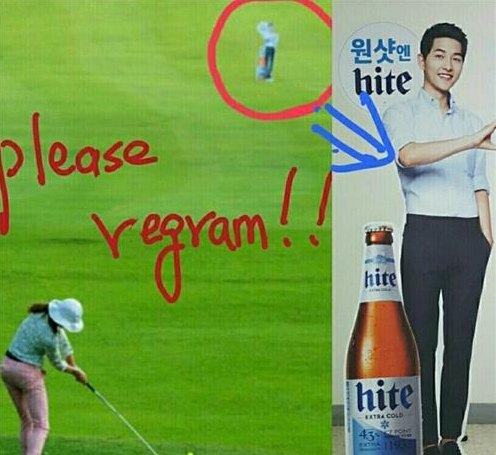 SEOUL, June 3 (Korea Bizwire) – Fans of Song Joong-ki, one of Korea’s top actors, went ballistic when Hite Jinro – a major Korean distiller – held a charity golf event in which a billboard of the actor’s real-life image was installed in the middle of the fairway.

Hite Jinro held a fundraiser golf competition at a golf course in Yongin on May 31. The company released a statement of apology on its social media platforms Thursday.

The image was installed some 220 meters from the tee, where an event zone was also installed, and according to Hite Jinro, the billboard was erected so that players could have a better idea of where to hit their shots.

However, the images of the event caused wild controversy, with the actor’s fans arguing that the billboard encouraged players to aim at the picture of Song.

“It angers me to see how they would use an image of someone who is one of the leading stars of Korean culture,” wrote one of the fans. “The actor should be treated with better respect.”

Hite Jinro released the following statement of apology on its social media platform:

We deeply regret the controversy that our actions have caused and apologize to all fans of Mr. Song. However, the event zone, contrary to widespread accusations, was not a game intended at aiming for the actor, but for players to hit the ball into a 30-meter ring. And although the billboard was installed to flag the ring, we still regret and acknowledge the fact that our actions were reckless with no respect to the model.