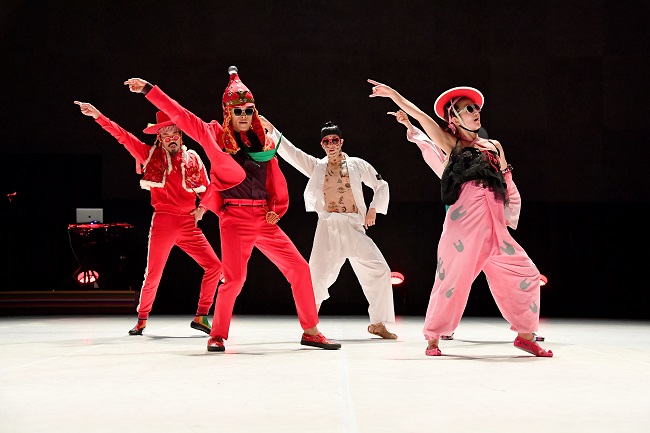 This photo, provided by Ok Sang-hoon, shows the Ambiguous Dance Company performing “Fever.” Kim Bo-ram, the group’s artistic director, is seen on the left wearing a red track suit and a vest

SEOUL, Nov. 11 (Korea Bizwire) — If you’ve ever seen their dance, chances are you probably saw it on repeat.

Ambiguous Dance Company, a group of sunglass-donning dancers showing off addictive dance moves in funky outfits inspired by Korean tradition, is the latest viral marvel to hail from South Korea.

The “Feel the Rhythm of Korea” series, tourism promotional videos showing the dancers in six Korean cities, have racked up some 145 million views on YouTube since July 30, with the most popular Busan video getting 32 million views.

People who have watched the videos have commented on how the dancers are like “Joseon hipsters” — referring to Joseon Dynasty (1392-1910), a significant era in the country’s history — or “dokkaebi,” legendary creatures in Korean folklore known for their extraordinary power and mischievous stunts.

“I think those comments come from people who like us. I guess we are easier and more straightforward to understand as a modern dance group,” said Kim Bo-ram, the artistic director that has led Ambiguous Dance Company for 13 years.

While the group may seem like a sudden sensation to some, it actually goes back to 2007, when Kim, who doubled as a backup dancer for first-generation K-pop artists like Um Jung-hwa and Koyote, set up a dance group with his friends.

“We were having drinks and there was an English dictionary there. In the first few pages which had all the A-words, I saw the word ‘ambiguous’ and thought it would be nice,” Kim said. “I didn’t know it would last this long.” 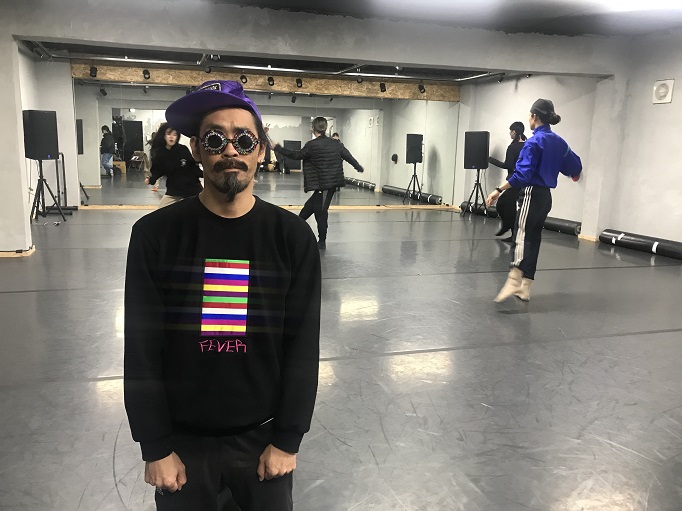 Like the group’s name, Ambiguous Dance Company is known for its genre-breaking and experimental choreography and visuals that are not constrained by convention.

Rather than dancing on a plaza or a stage, the dancers appear in the most unlikely places, like an early morning port where fishermen are getting ready for the day or the curling arena where the 2018 PyeongChang Winter Olympic Games were held.

“We filmed from around 5 a.m. to around 7 p.m. for each video. The filming at the port in Mokpo was the most challenging — the stench was so strong that we felt as if we couldn’t remember the next move,” Kim said.

“But at the same time, we could feel what the fishermen go through.

“The most fun part was dancing at the curling stadium,” Kim went on. “It was our first time visiting a curling stadium and it was also our final filming segment. Everyone was really exhausted but turned that into a positive, fun energy on ice.”

Since the dance group already owned a solid portfolio of performances, such as “Fever” and “Body Concert,” it didn’t have to create new moves for the series. The outfits for the six videos were mostly recycled from their previous works.

In the video filmed in the traditional city of Andong, the team came up with a new costume — a sparkly suit with a “saekdong,” or rainbow-striped shirts — to share the message of returning to roots while giving off the feeling of people from the future revisiting an ancient town, according to Kim.

The focus on the visual details is a central part of the dance group’s identity. One of the most prominent features of its avant-garde performance style is wearing sunglasses or goggles in most of its works.

It started off as a makeshift device to help the dancers overcome their shyness or stage fright, and then developed into a concept that aims to have the audience only focus on the body and dance moves.

In the recent videos that went viral, the sunglasses and goggles played a significant role in imbuing an eccentric yet hip vibe.

“Dancing with the sunglasses, especially the goggles, is really tough. As moisture fills inside the goggles, it feels like dancing underwater,” Kim said.

“Sometimes it’s even hard to walk on stage. Most of us have got used to it but we always make sure that new dancers train a lot before dancing in them. 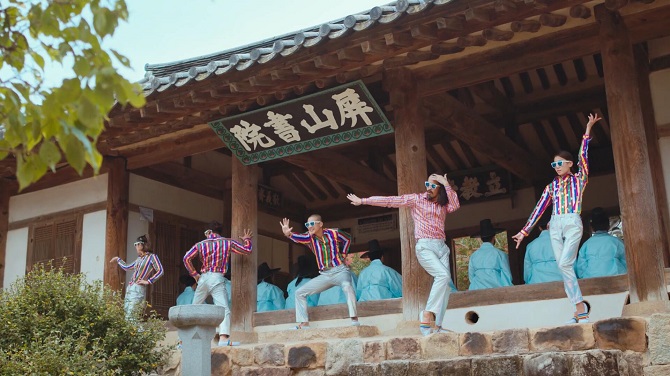 This photo, provided by the Korea Tourism Organization, shows the Ambiguous Dance Company dancers performing in the “Andong” video of the “Feel the Rhythm of Korea” series.

“It’s become our trademark but there have to be concrete reasons why we’re wearing them. We try to discover new reasons to wear them while we sometimes do stage works without wearing sunglasses,” Kim said sheepishly, adding he still puts them on for interview shoots.

In fact, under the group’s playful and nonchalant facade lies years of self-contemplation on dancing and what it means to be a dancer in South Korea.

“What matters is not what kind of move we perform but how far we can go with expression. The move itself becomes meaningless beyond a certain point. That’s why we try to avoid choosing conclusions,” Kim said.

“What’s important is how dance can bring about various reactions from the audience. There’s no need to be funny or be tragic. The potential of the dance language is that there can be a variety of interpretations.”

In this sense, Kim said he hopes the dance company could help bring the audience close to the dance genre, which is often considered too fancy or difficult to comprehend.

“If the day comes for people here to go see a dance performance more often, like they go see a movie, I hope that the Ambiguous Dance Company could be remembered for making that contribution,” Kim said.

The veteran dancer said he had one thing he would like to make clear before the interview wrapped up.

“Getting to know yourself is one of the most painful processes but that should be what underlies culture, everything. … It may seem that we are popular because we did a good interpretation of tradition but it’s more because the dancers invested a lot of time to better understand our bodies. It’s an endless job.”

One thought on “Ambiguous Dance Company: the Dance Group Behind Weirdly Wonderful Tourism Promotional Videos that Have Gone Viral”