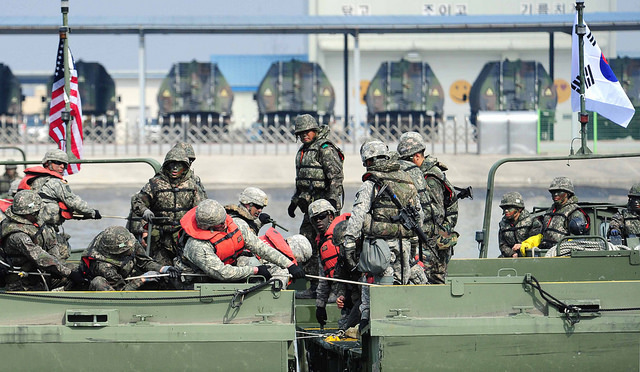 Contrary to Mr. Trump’s accusations, the Korean government covers half of total military expenses for the USFK, which accounted for 932 billion won in 2015. (image: Flickr/ Republic of Korea Armed Forces)

According to KEPCO, electricity consumption by the USFK was 683 million kWh in 2015,  compared to 1.595 billion kWh for the Korean military.

However, given the number of personnel, with 28,500 American soldiers but around 630,000 Koreans, the average American soldier (23,965 kWh) consumed 9.47 times more electricity than their Korean counterpart (2,531 kW), the data noted.

Officials suggest that the USFK’s cheaper electricity rates are one of the factors encouraging excessive consumption of electricity.

The USFK currently receives electricity benefits, paying cheaper rates than Korean households and even industrial customers, which pay the lowest rate at 107.41 won per kWh. In 2015, the USFK paid a rate of 106.94 won/kWh, while the rates were 122.28 won/kWh for the Korean military, 123.69 won for households, and 113.22 won for educational institutions.

For an ordinary household, KEPCO imposes a 1.5 percent late fee for payment that are one month overdue, 3 percent for two months overdue, and so on, whereas no late fees are charged when USFK members make late payments.

The data also showed that the USFK had unpaid electricity bills totaling over 1.9 billion won (as of September 7) from January to July 2016.

Military power consumption data has been in the spotlight amid criticism of Korea’s controversial electricity billing system, and repeated remarks by U.S. Republican presidential candidate Donald Trump, who called the country a free-rider of the American economy and its military forces.

Contrary to Mr. Trump’s accusations, the Korean government covers half of total military expenses for the USFK, which accounted for 932 billion won in 2015, in addition to offering other smaller advantages like electricity fees. The figure was roughly 0.068 percent of the national GDP, higher than Japan (0.064 percent) and Germany (0.016).