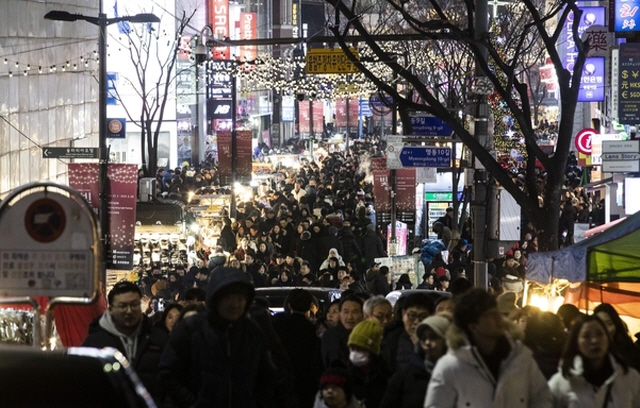 SEOUL, Jan. 25 (Korea Bizwire) — Foreign tourists have varying tastes when it comes to sightseeing spots in Seoul, depending on their nationality, a research paper showed Friday.

Visitors from Asia prefer Myeongdong, one of the capital’s main shopping districts, while European and American tourists are most impressed by royal palaces, according to the paper jointly published by the Seoul Metropolitan Government and Kyung Hee University.

Chinese and Americans gave high marks to Seoul’s security, while Japanese and Europeans said they are satisfied with food and shopping, respectively, it noted.

The research paper was based on an analysis of a Korea Tourism Organization survey of 9,942 foreigners who visited Seoul in 2017. They were selected out of 13,841 foreign tourists sampled by the organization after visiting South Korea that year.

The study said that 30.9 percent of Chinese visitors to Seoul named Myeongdong as the most satisfactory place, trailed by Dongdaemun Market (9.7 percent) and N Seoul Tower on Mount Nam (8.8 percent).

Among Japanese tourists, Myeongdong topped the list with 33 percent, compared with the area comprising Shinchon and Hongdae (9.2 percent) and Dongdaemun Market (8.1 percent).

But the largest number of tourists from the Americas, 20.8 percent, liked royal palaces the most, followed by Myeongdong (7.8 percent) and Itaewon (7.2 percent), the study showed.

Among Europeans, palaces also topped the list with 21.1 percent, trailed by Myeongdong and the Gangnam Station area in southern Seoul together (6.5 percent) and N Seoul Tower (5.9 percent).

The paper explained that shopping is the top motivation for visitors from China, Japan and other Asian countries, while American and European tourists prioritize history and cultural heritage. The main shopping items are perfume and cosmetics for Chinese tourists and clothing for other nationalities.

All foreign tourists, except those from China, said they gathered travel information on South Korea from the Internet. Among the Chinese, 64.7 percent said they got the information from relatives, friends and fellow workers.

Chinese and European tourists had the highest rate of solo travel, while the Japanese preferred traveling in pairs and tourists from other parts of Asia favored groups of more than three people.

More than half of tourists from the Americas, Europe and Asia (excluding Japan and China) were first-time visitors to Seoul. But 51.1 percent of Japanese people had visited Seoul more than four times in the past. In the case of the Chinese, first-time visitors made up 37.4 percent, with 28.3 percent having visited the capital more than four times.

Japanese travelers had the shortest period of stay at three days on average, followed by five days for Chinese and other Asians and 11 to 20 days for Americans and Europeans.

The study noted that the ratio of positive responses to South Korea’s image among American tourists rose from 78 percent to 97.3 percent after traveling here. In the case of European tourists, the ratio similarly surged from 77.7 percent to 96.8 percent, it said.