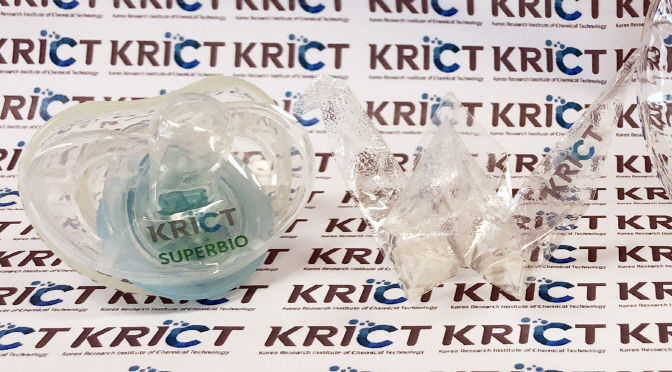 The researchers expected that the technology will be applied to children’s products such as baby bottles, strollers and toys. (image: Korea Research Institute of Chemical Technology

DAEJEON, Jun. 20 (Korea Bizwire) — A research team at the Korea Research Institute of Chemical Technology has developed high-strength and thermal resisting super bioplastics that do not contain any harmful chemicals.

Thanks to its unrivaled convenience, plastic, which is widely used in our society, has recently been cited as the main culprit for environmental damage.

Petroleum-based plastics with Bisphenol-A (BPA) have become a major culprit, especially as it is classified as a chemical that disrupts the endocrine system.

With the moisture in the air, plant-based monomers can easily end chemical reactions. This means that the intensity is lower than that of similar petroleum-based products.

The researchers solved this problem by using a phase transition catalyst.

Through chemical reactions, the monomer isosorbide was turned into one long chemical material. When the process is complete, phase transition catalysts played a role in maximizing reactivity of isosorbide.

The specific strength of the bioplastic and intensity per unit weight using this process was stronger than steel when it weighed the same amount.

The researchers explained that it is the strongest bioplastic ever released in the academic world. The tensile strength was 80 MPa, which is higher than most petroleum-based plastics.

In particular, the researchers expected that the technology will be applied to children’s products such as baby bottles, strollers and toys.

Dr. Oh Dong-yup, a researcher at the institute, said, “The materials that babies put their mouths in should be trustworthy. I developed the new bioplastic with the thought that my baby could touch the plastic.”

Meanwhile, the results of the study were published in the online edition of Nature Communications on June 13.