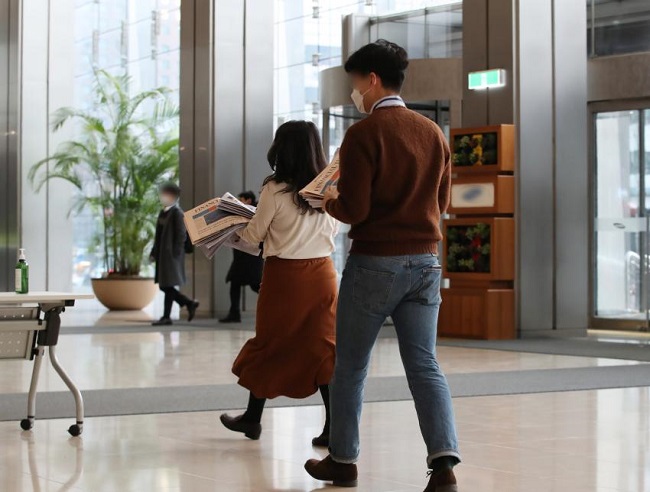 Employees clad in casual wear arrive at the Bank of Korea headquarters in Seoul on Jan. 4, 2021, the first work day of the year, as the central bank implemented a measure allowing its workers to dress casually at their own discretion starting on the day. (Yonhap)

SEOUL, Jan. 7 (Korea Bizwire) – The South Korean central bank officially abolished its dress code at the start of the new year, a move aimed at revamping its conservative and rigid organizational culture.

On Monday, the first work day of the new year, it was not hard to find Bank of Korea (BOK) employees wearing sweaters, jeans and sneakers instead of formal suits.

Up until the recent rule change, BOK workers had to follow the standard dress code, which consisted of a suit jacket, pants, black shoes and white shirts with the buttons fastened up to the collar.

Unlike most private companies that started liberalizing their dress codes about ten years ago, it has been considered a tacit taboo for the employees of the central bank to talk about liberalizing the dress code.

BOK Gov. Lee Joo-yeol, however, made a resolution to break the long-standing practice and liberalize the dress code as a way to improve the organizational culture.

Starting from early last year, the bank also started in-house radio broadcasting with its employees in their 20s and 30s serving as DJs.

This move is part of efforts to shed the outdated image of the BOK that has long been regarded as being passive in communication and dull to external changes.