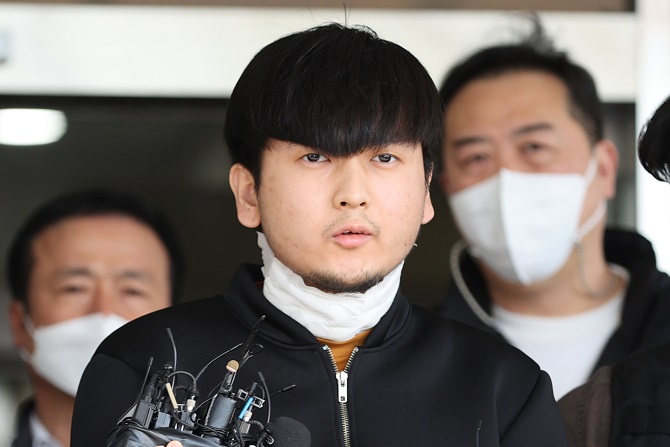 This photo shows Kim Tae-hyun, 24, being sent to prosecutors from Dobong Police Station in Seoul on April 9, 2021, on suspicion of killing a woman whom he had allegedly stalked, her mother and younger sister on March 23. A police committee has concluded that the disclosure of the man’s personal information, including his photo and name, was in the public interest, given the gravity of his crime and the level of attention on the case. (Yonhap)

SEOUL, April 30 (Korea Bizwire) — Last month, South Koreans woke up to the chilling news of a 24-year-old stalker having killed a woman, her mother and younger sister after she cut off contact with him and changed her phone number.

His monthslong stalking foreshadowed more violent crimes, but law enforcement failed to take steps to prevent such a tragedy in a nation where the offense is classified as a misdemeanor carrying the maximum penalty of a mere 100,000 won (US$89.40) fine.

“Despite the sinister nature of the crime, our society has not recognized it as a serious offence that requires significant penalties. Some even say such an act is a kind of expression of affection,” Jang Yun-mi of the Korea Woman Lawyers’ Association said.

She pointed to government data showing that a total of 4,515 stalking cases were reported to police last year but nearly 90 percent of them were closed without an investigation because the criteria for punishable stalking are too high.

“Stalking not only causes mental impacts. We should be mindful of the risk of this type of offense escalating. In fact, three out of 10 murder cases targeting women in 2019 were committed by stalkers,” Jang said.

Stalker-killer Kim Tae-hyun had allegedly harassed the victim for months after getting to know her online. As she cut him off, he carefully premeditated the homicide, according to the investigators.

He posed as a delivery man to get into her home and stabbed the three people one by one to death while waiting for them to return home.

On Tuesday, the prosecution indicted him on charges of murder, housebreaking, harassment, theft and the violation of information and communication network law.

One day after the killings, amid mounting public outcry, the National Assembly passed a new law that calls for heavier punishment for convicted stalkers. 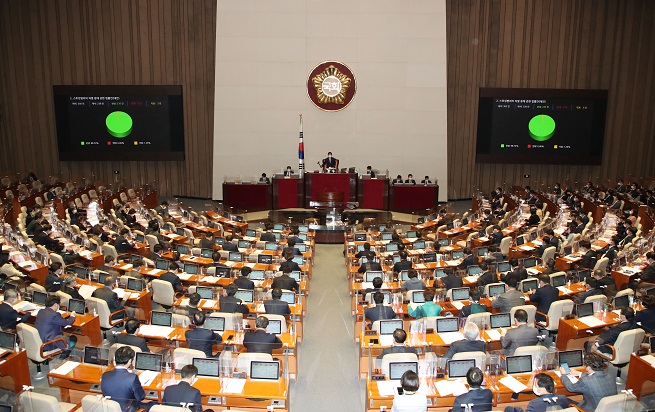 Lawmakers pass a bill that calls for tougher punishment for stalking during a plenary session of the National Assembly in Seoul on March 24, 2021. (Yonhap)

“It took 22 years for the new law to be approved, as it was first proposed in 1999. If it had been enacted earlier, we might have stopped Kim and saved the innocent lives,” Lee Soo-jung, professor at the Kyonggi University, said.

The new law is to take effect in September and is not applied retroactively.

But experts have called for revising the new law, raising questions about how effective it will be in protecting victims and preventing crimes.

The act stipulates that prosecution is not possible if a victim expresses his or her objection, which could boost chances of perpetrators blackmailing or coaxing victims into dropping their complaints.

The experts also noted that the law defines acts of stalking in a narrow and abstract manner, though stalking takes many different forms.

“The law says that stalking must take place repeatedly in order to be regarded as a criminal act. But that could hamper swift responses, which is crucial given the high recidivism rate of this type of crime,” Seung Jae-hyun, a researcher of the Korean Institute of Criminology, said.

“There are also many other conditions required to charge a suspect and it is bound to create a legal grey area,” he added. 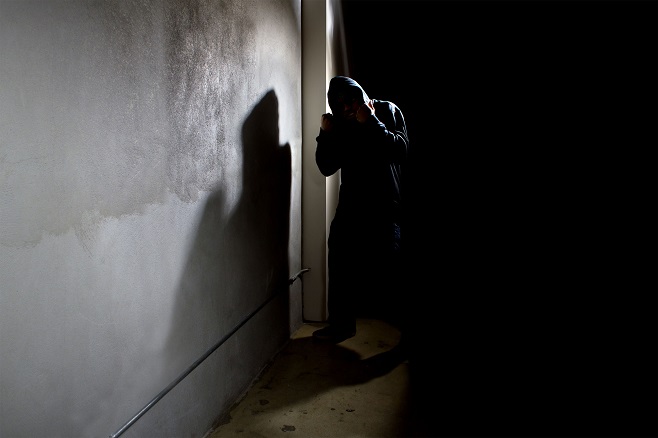 They also pointed to the lack of measures to protect and support victims.

“Victims are not allowed to seek a protection order from a court by themselves, as police are supposed to take due steps in advance. That means victims have to wait long before finally having legal safeguards, which will eventually render them more vulnerable,” professor Lee said.

She also called for tougher regulations against stalking online, which can easily spill over into the real world. Cyberstalking refers to the use of the internet, e-mail or other communication tools to harass or stalk others.

A recent poll by the National Information Society Agency showed that 42.3 percent of the 1,500 adult respondents experienced cyberstalking last year, and it accounted for the largest share among all types of online harassment.

Amid mounting fears, citizens are seeking and sharing diverse measures of their own to prevent themselves from being victimized.

The 32-year-old Kim Ran said she sprays old perfume to blur personal information on delivery boxes, after learning that Kim Tae-hyun learned the victim’s address from a delivery box.

“The story really terrifies me, particularly as I live alone. Such a tip as perfumes working well in removing ink letters is something that I never can laugh off,” she said.