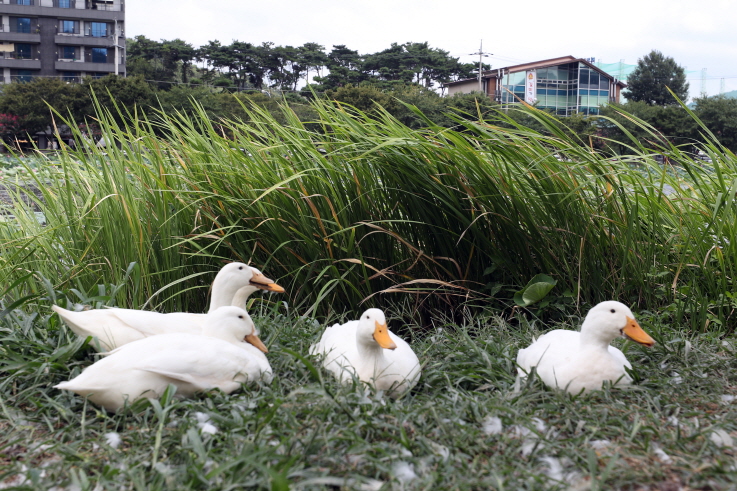 GWANGJU, Aug. 22 (Korea Bizwire) — Two contradicting demands are being made by Gwangju residents, who are currently divided over a group of ducks that are currently living in a lake park in the southwestern city.

Citizens of the area are focusing their attention on the decision to be made by the municipality to either capture the ducks or to set them free.

According to local sources, a group of five ducks are currently living at Jeonpyeongje Park situated in Maewol-dong in Seo-gu, Gwangju.

Thought to have been released by their owner, 10 ducklings were found to have made the park their home early last year.

Only five ducks remain after the others did not survive attacks by stray dogs and other dangers that lurk in the area.

In the meanwhile, complaints were filed by residents, asking the local government of Seo-gu to eradicate the ducks.

According to the complaints, the ducks were dirtying the lake and emitting bad odors.

The municipality of Seo-gu, in response to the complaints, had set out to find the owner of the ducks by displaying banners all over the park.

The banners asked the ducks’ owner to fetch them by August 20, as releasing live animals in the park is forbidden.

Meanwhile, a group of residents are attempting to stop the government’s attempt to capture the ducks, claiming that five ducks cannot dirty the water of a lake that is 100,000 tons in capacity.

They also said that the claim that the ducks were giving off bad odors was exaggerated. Rather, they said, the ducks are bringing joy to visitors, having become the unofficial mascots of Jeonpyeongje.

Officials at the local government in charge say that as the ducks are not migratory birds, they have no choice but to capture them.

But considering that there are some residents who have welcomed the ducks into their neighborhood, the government is still trying to work out a solution that is amenable to all.