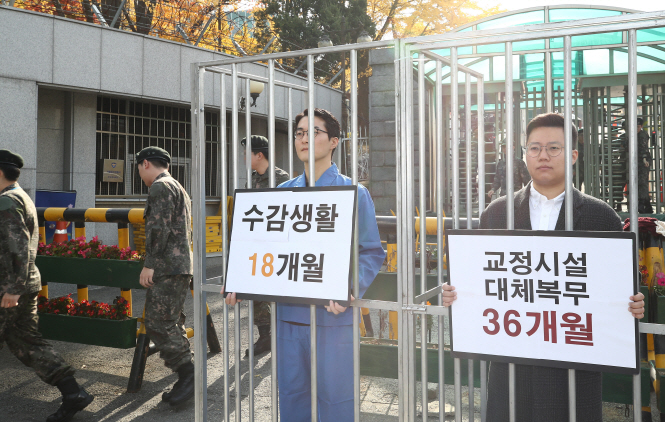 Civic activists hold a protest rally in front of the Ministry of National Defense in Seoul on Nov. 5, 2018, to oppose the ministry’s plan to introduce an alternative service for conscientious objectors. (Yonhap)

SEOUL, May 28 (Korea Bizwire) — Since the Supreme Court’s landmark decision last year that religious and conscientious beliefs are to be considered valid reasons for refusing the military service mandate, an increasing number of courts across South Korea have been accepting conscientious objectors.

However, there continue to be a number of cases where objectors are being sentenced to serve time in prison.

Last November, Suwon District Court sentenced an individual referred to only as Jeong to one year in prison for not joining the military after receiving a notice of enlistment.

Jeong argued that he conscientiously objects to carrying a rifle, but the court still decided to punish him for failing to express his beliefs until the final moment before being enlisted.

The court’s decision reflects the intent that it will not accept any form of conscience that did not exist before the time of enlistment.

Seoul Western District Court also sentenced an individual referred to only as Oh to 18 months in prison for his conscientious beliefs.

Oh claimed that he conscientiously objects to joining the military due to its role of expanding and reproducing violence.

But the court ruled that his conscience is malleable and prone to change, failing to meet the qualifications of an ‘authentic’ conscientious objector.

The court then pointed to Oh’s prior statement as evidence that “civilians taking up arms against the government during the May 18 Gwangju Democratization Movement was not violence.”

Both cases are being seen as an extent of the Supreme Court’s interpretation of conscience.

The Supreme Court ruled in November that religious and conscientious beliefs are to be considered valid reasons for refusing the military service mandate.

The beliefs should be deep, clear, and truthful in order to be considered a ‘true conscience’.

The court defines that ‘deep’ belief influences all thoughts and actions of the objector, and ‘clear’ belief indicates that it is not malleable or prone to change.

A ‘truthful’ belief means that there are no lies, and that it does not make compromises or take strategic options.

The two cases are expected to become meaningful precedents in deciding future cases of conscientious objectors.