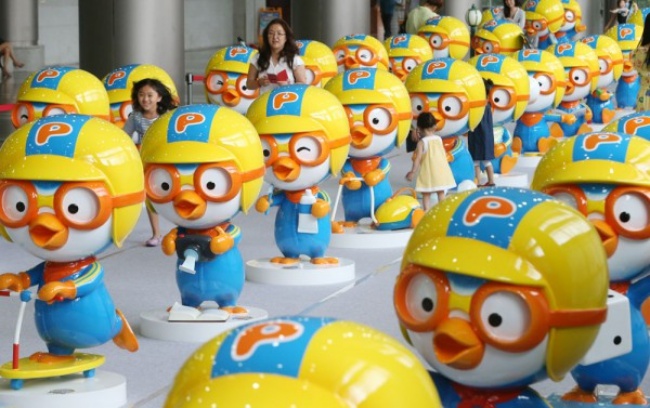 The KOCCA released the rosy figures at a seminar held on Monday, during which participants looked back on the content industry’s performance and sales projection this year and set out plans for next year. (Image: Yonhap)

Exports of South Korean content, including the character, movie, music, and animation industries, grew 8.6 percent this year despite Chinese economic retaliation against South Korean cultural exports, and are expected to hit $6.74 billion at the end of this month, the Korea Creative Content Agency (KOCCA) said.

The KOCCA released the rosy figures at a seminar held on Monday, during which participants looked back on the content industry’s performance and sales projection this year and set out plans for next year.

When broken down in detail, the character industry came out on top, amounting to 11.9 trillion won, while the film industry stood at 5.9 trillion won.

The music industry followed closely with 5.8 trillion won, while the comic book and animation industries were estimated to be worth 1 trillion won and 700 billion won, respectively.

According to the KOCCA, the five keywords describing this year’s content industry were ‘crisis’, ‘growth’, ‘change’, ‘sensitivity’, and ‘experiment’.

‘Crisis’ represents the hardships that have faced the South Korean content industry this year, following political tensions with China over the deployment of THAAD missile-defense systems on South Korean soil, as well as the poor working conditions many found themselves in.

The success of Line Friends, with international sales of 100 billion won this year, and K-pop boyband BTS, which now has over 10 million followers on Twitter, both contributed to the keyword ‘growth’.

‘Sensitivity’ was chosen on the back of the popularity of over-the-top content as a consumer trend to move away from the digital world, typified by the success of web novel series.

Variety shows with refreshing formats such as Produce 101 or children video series ‘Pink Pong Shark Family’ helped ‘sensitivity’ become a keyword this year, while soaring sales of AI speakers, growing interest in crowdfunding, and success of localized content made this year’s industry ‘experimental’.

The KOCCA projected Creator First, which means showing appreciation for writers, and Breaking the Simplicity, referring to a more diverse and sensitive strategy for K-Wave to sweep across the industry next year.