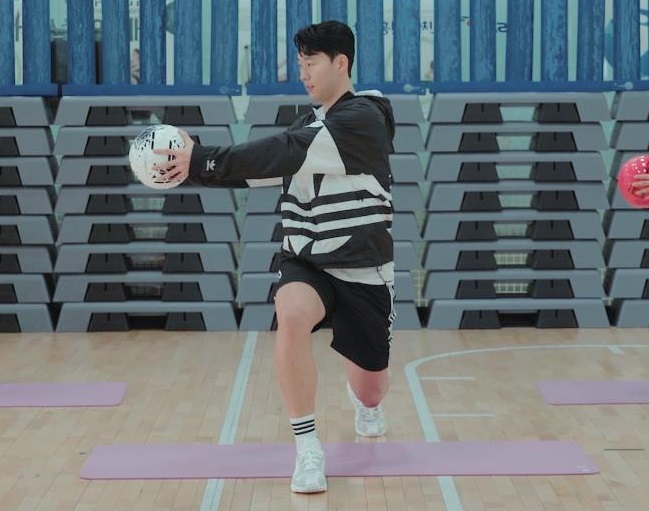 Tottenham Hotspur’s South Korean star Son Heung-min demonstrates a stretching exercise using a ball as part of an indoor exercise campaign by the culture ministry amid the coronavirus crisis, in this photo provided by the ministry on April 21, 2020.

SEOUL, April 24 (Korea Bizwire) — At the height of the new coronavirus outbreak, countless people are stuck at home, and most have been unable to enjoy their leisure activities.

It is said that online games and online workouts are the flagship products of the new ‘homeconomy’ that allow citizens to enjoy their leisure time.

Homeconomy is a combination of the English word “home” and “economy.” It refers to an economy that targets the consumption of people confined to their residence who spend all of their leisure time there.

Those stuck at home are not just enjoying games on personal computers, but are doubling their fun by engaging in online activities.

While it can get boring exercising alone for a long time, using equipment such as a stationary bicycle or treadmill, when connecting online, people can have fun competing against others around the world.

Meanwhile, the COVID-19 outbreak is not just about revitalizing the existing homeconomy, the pandemic has even expanded the definition of the word itself.

In order to prevent the spread of COVID-19, a number of sectors were incorporated into the homeconomy through telecommuting, including the opening of online schools with the aim of maintaining social distancing.

The U.S. IT giant Microsoft Corp. said in a recent report on remote work that video conferences using its Microsoft Teams collaborative communications hub increased more than 1,000 percent in March.

For example, on March 31 alone, the use of the Teams video conference reached a new high of 2.7 billion minutes, compared to only 900 million minutes on March 16.

One of the reasons why video conferencing has become so popular is that people can communicate almost face-to-face when their work is sensitive.

Mobile device-based usage, such as smartphones and tablets, also increased noticeably. From early February to March 31, the number of mobile users increased by about 300 percent. 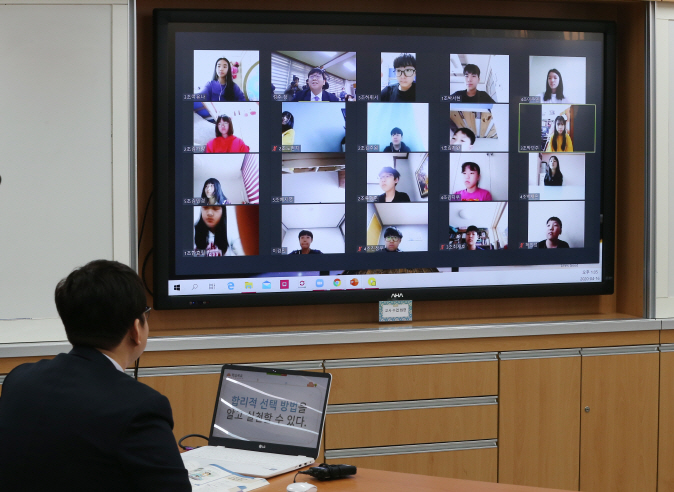 A teacher conducts an online class at Yeompo Elementary School in the southeastern city of Ulsan on April 16, 2020, as online classes for middle and high school freshmen and juniors and elementary school students in grades four through six began nationwide. (Yonhap)

If Teams is a representative example of a new homeconomy in terms of software, hardware-based applications are also rapidly expanding.

According to a local open market operator Wemakeprice Inc.’s analysis of video-related IT device sales from March 12 to April 1, webcam sales jumped by close to 3000 percent compared to the same period last year.

More consumers are looking for laptops, which increased by 44 percent, while sales of tablet PCs jumped 40 percent, and monitors by 53 percent.

The increase in sales of IT devices is believed to have been influenced by not only the opening of online schools but also the popularity of online video conferences and untact interviews.

“Corporate telecommuting and online public education will open an unforeseen era of transformation not only in South Korea but across the globe,” said Yoon Eui-joon, CEO of Tomodomo Co. and an IT system construction expert.

“As we have finally expanded the scope of online activity to areas which were previously unviable, if we enter the stage of stabilization through a transitional period, it could be an example of innovation in the fourth industrial revolution, where changes in the way we form new human relationships and business opportunities will be provided accordingly,” Yoon added.