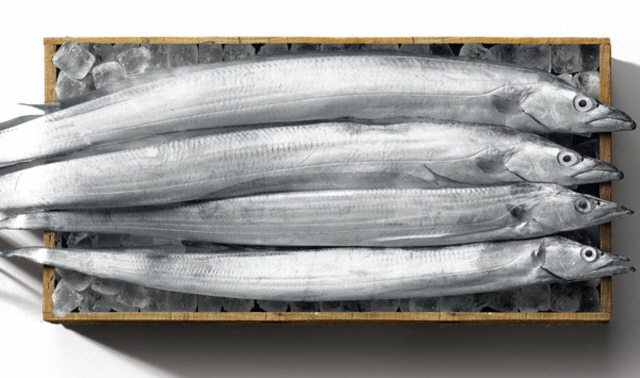 Cutlassfish live in warmer subtropical currents of the south coast of the Korean peninsula including Jeju Island and the neighboring seas. (image: E-Mart)

SEOUL, Aug. 13 (Korea Bizwire) — Cutlassfish that normally live in the warmer seas south of the Korean peninsula have appeared near the coast of Sokcho, Gangneung Province.

In the northern county of Goseong, a fisherman caught a spearfish, another kind of tropical fish.

These sightings are evidence that the Korean peninsula is turning into a subtropical climate.

According to local residents, a school of cutlassfish appeared near the coast of Cheongho-dong in Sokcho for the very first time after typhoon Francisco passed through the East Sea on August 6.

Cutlassfish live in warmer subtropical currents of the south coast of the Korean peninsula including Jeju Island and the neighboring seas.

Experts claim that rising water temperatures are the major cause of change in marine species in the East Sea.

The National Institute of Fisheries Science said that water surface temperatures in the East Sea rose by 1.43°C over the last 51 years since 1968, which is 2.8 times the average rise in sea temperatures across the world.

Warmer temperatures have brought about significant change in marine life in the East Sea, where 3,240 tons of yellowtail were caught in 2017, rising to 4,994 tons last year.

This year, stationary nets set up near Gajin Port in Goseong County caught 13 tons of tuna, as well as a spearfish that was caught last Sunday.

Spearfish are known to live in tropical and subtropical waters in the Pacific, Indian, and Atlantic oceans.

Experts expect that most of the regions of the Korean peninsula will soon become a part of the subtropical climate.

The Trenwartha Climate Classification states that a region qualifies as subtropical if it maintains a monthly average temperature of more than 10°C over eight months.

According to the Korea Meteorological Administration, Jeju Island and the southern part of the Korean peninsula have already turned into a subtropical region after maintaining an average of more than 10°C over eight months.