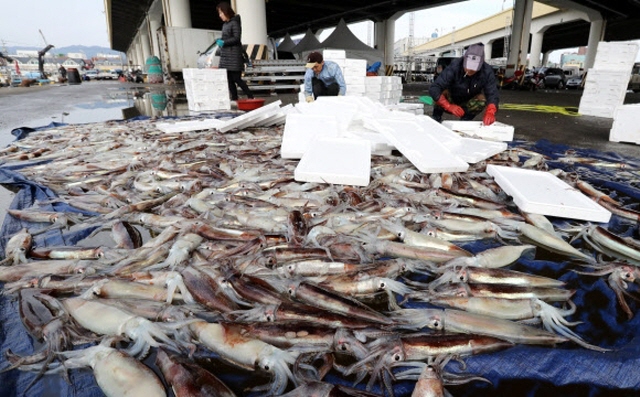 SEOUL, Jun. 26 (Korea Bizwire) — Once synonymous with Ulleungdo, an island off the east coast of mainland South Korea, squid are now caught more in the nation’s southernmost region than in the waters of the East Sea.

According to a report released by Statistics Korea, the total amount of Pacific flying squid – the type of squid commonly consumed by Koreans – caught last year totaled 87,024 tons, a steep drop from 252,618 tons caught in 1996.

According to Statistics Korea, the squid haul grew in the 1990s as temperatures in surrounding waters rose, attracting squid that were comfortable in warm currents.

But as illegal Chinese fishing boats have recently been violating the joint Korea-Japan fishery zone, the South Korean squid catch has decreased significantly.

The aggregate squid catch in 1970 was recorded at 67,922 tons in the East Sea area surrounding Gangwon and South Gyeongsang provinces, but has since dropped precipitously, reaching only 32,500 tons last year.

Meanwhile, the squid haul from the southern coast grew appreciably, from 4,048 tons to 51,874 tons during the same period.

Other types of fish caught in the East Sea have also dropped in volume. The total catch of pollack, also a favorite among Koreans, dropped from 46,890 tons in 1986 to just 1 ton last year.

As sea temperatures have continued to rise, pollack, which prefer colder water temperatures, moved north to the Pacific Ocean.

In addition, the catching of young pollack in large quantities has led to the fall of their numbers since the 2000s.

Scientists say that the latter played a greater part in the fall of the pollack population, more so than reasons attributed to the rise in water temperatures.