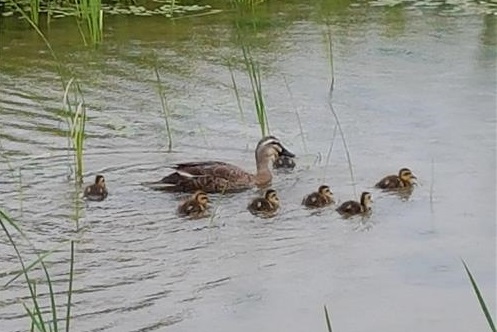 SEOUL, Jul. 30 (Korea Bizwire) — A family of seven wild Indian spot-billed ducks were discovered at Ichon Hangang Park in Seoul just six months after the city government started a project to restore the ecology of the area.

The city government of Seoul said yesterday that a mother duck was spotted with six ducklings in the wetlands created at Ichon Hangang Park.

Seoul has been implementing a project that aims to “restore the nature of the Han River.”

The wetlands were developed with iris, cattail and other plants donated by the district government of Changnyeong in South Gyeongsang Province.

In addition to the Indian spot-billed ducks, dragonflies and water striders have been spotted.

Indian spot-billed ducks usually live in freshwater lakes and rivers, more often in spots where aquatic plants are of abundance.