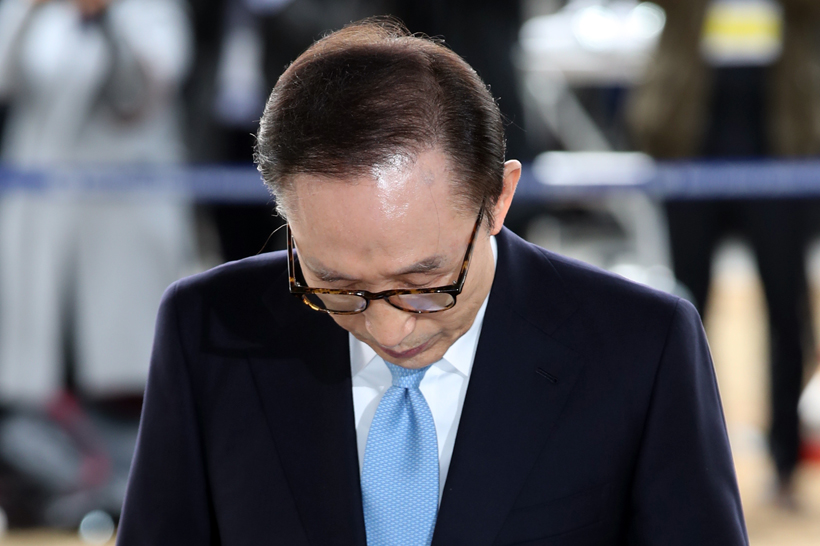 SEOUL, Mar. 14 (Korea Bizwire) — Former President Lee Myung-bak stood before a barrage of camera flashes Wednesday as he appeared at a prosecutors’ office for corruption questioning, adding a humiliating last chapter to his otherwise successful career as a business CEO, lawmaker, mayor and president.

Lee first became publicly known when he served as Hyundai Construction CEO between the late 1970s and the early 90s, the culmination of a meteoric rise from a rank-and-file employee to the top job at one of the country’s top companies in just 11 years in what was often dubbed the “Myth of Salaryman.”

Lee entered politics in 1992 when he was elected to the National Assembly. He was reelected four years later but gave up the seat in 1998 to run in the mayoral election. Even if he had not quit, he would have lost the seat because two months later he was convicted of charges he spent more than the legal limit on the campaign.

For the following couple of years, Lee stayed out of politics as he was barred from running for public office due to the conviction. After his election right was reinstated in a presidential pardon in 2000, he came back as mayor of Seoul in 2002.

While in office, Lee gained popularity after pushing ahead with such signature projects as restoring the Cheonggye Stream running through the center of Seoul and overhauling the public transportation system that enabled bus-subway transfers free of charge or at much lower costs.

Riding that wave of popularity, he ran for president in 2007 and won an easy victory, garnering 49 percent of the vote against the runner-up’s 26 percent, amid expectations that he would help turn the country’s struggling economy around.

His leadership, however, was battered just months after he took office in 2008 as massive numbers of people took to the streets for months to protest his decision to resume imports of American beef despite concerns about mad cow disease.

Regardless of whether mad cow fears were scientifically proven or not, the case led to Lee’s image as a leader uncaring about ordinary people and caring only for the interests of the rich and powerful. That perception deepened as income inequalities grew amid a global economic downturn.

Another blow to Lee’s leadership was the suicide of his predecessor Roh Moo-hyun.

Roh jumped to his death from a cliff behind his rural post-retirement home after undergoing corruption questioning by prosecutors. Supporters blamed Lee for forcing humiliation on his predecessor with the investigation and leading to his suicide.

Corruption suspicions dogged Lee even before his election as president.

The most representative of them is a high-profile stock manipulation case involving one of Lee’s business partners, Kim Kyung-joon. Kim, head of investment firm “BBK,” was convicted of pocketing millions of dollars in ill-gotten profits from the manipulation. Lee had been alleged to be the real owner of BBK, but a prosecution investigation at the time found no evidence backing up the allegations.

One of the biggest investors in BBK was DAS, an auto parts firm headed by one of Lee’s older brothers. Widespread suspicions are that Lee is the real owner of DAS and used the company to create slush funds. He is also accused of using his presidential powers to help DAS recover the lost investment from Kim.

Including suspicions involving DAS, Lee is facing about 20 counts of charges, including ordering presidential aides to receive illicit money from the state intelligence agency’s off-book funds. Key aides to him have already been arrested over the charges.

Lee has denounced the investigation as political retaliation by the administration of President Moon Jae-in over the death of former President Roh. Lee’s associates have claimed that the government of President Moon, a key Roh ally who served as Roh’s chief of staff, is trying to force the same humiliation back on Lee.

After arriving at the Seoul Central District Prosecutors’ Office, Lee said in brief remarks, televised live, that he is sorry for “causing concern to people with matters involving me” but apparently insisted that the investigation is political revenge.

“Hopefully, this will be the last in history,” he said.