Park followed Yoon Ji-sung and Ha Sung-woon to become the third ex-Wanna One member to release a solo album. His six-track record “O’CLOCK” is fronted by “L.O.V.E,” a futuristic R&B number that explores a male love confession.

“It’s a song filled with the feelings of innocence, rapture and passion, carrying a pure-hearted man’s heartfelt confession of love,” Park said in a media showcase for the new album. “It also contains my message to fans.”

The album title, “O’CLOCK,” embodies Park’s wish to “have every moment of the solo career remembered specially,” according to Park.

Alone for the first time since Wanna One disbanded in January, he had to pay extra efforts to put together a full-length song and its music video on his own.

“As it’s a project to show my everything from A to Z, I made multiple times more efforts than I did in the past, and in the process, I think I found some of my unknown sides that were hidden even to myself.”

His eagerness to speedily return to the K-pop scene outweighed any pressure and anxieties entailed by the release of the first solo album.

“Rather than pressure and worries, I wanted to meet with fans as soon as possible because I thought they may have a hard time waiting for me,” he said. He also wanted to “prove that I can make it on my own.”

Asked to compare working as a soloist and in a group, he said, “The good side of being solo is that I can have (the stage) all to myself and from fans’ point of view, they can focus solely on me from the start to the end.”

“But the shortcoming is loneliness. I have no one to have fun with around me during the waiting time (for show appearance).” 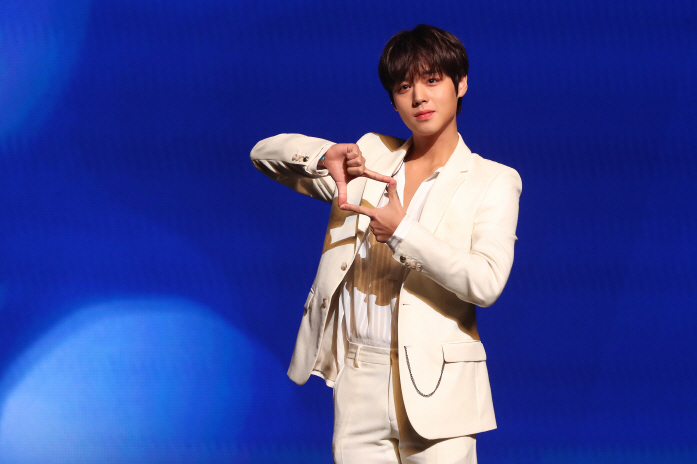 Park’s first solo album has as its last track, “Young 20,” a R&B song composed by his former band mate Lee Dae-hwi and written jointly by Lee and himself. The intro track, “The beginning of …,” is a special song for his fans, whose fandom name is May.

With the new phase of his music career, Park also plans to venture into acting, having been cast in a new drama series by cable channel JTBC.

His role in the comic period fiction is his first acting project as an adult, having debuted as a child actor. The series is set to hit the small screen in September.

He is also planning to throw a solo concert at the end of the year, Park said.

His return to the music scene comes as another former high-profile Wanna One member Kang Daniel’s plans for solo career were put on hold amid legal issues.

Kang is currently embroiled in a legal battle with his current management agency, LM Entertainment. Last week, Kang’s side filed a formal request with a Seoul court seeking approval for the artist’s decision to terminate his exclusive contract with the management agency, claiming unfairness of the contract.

LM vowed to fight to retain the contract, saying it “will make efforts for Kang Daniel to resume his show business career as soon as possible through smooth consultation.”