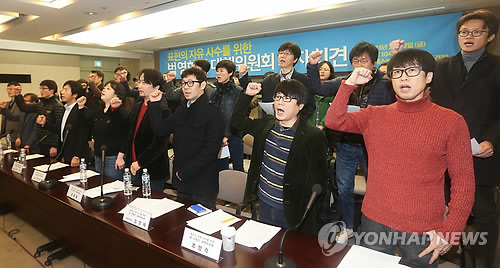 The task force composed of 70 organizations in the film industry held a news conference in Seoul. (image: Yonhap)

SEOUL, Feb. 13 (Korea Bizwire) — A movie industry task force on Friday lodged a protest over the authorities’ alleged attempt to oust the executive director of the Busan International Film Festival (BIFF) for his decision to screen a politically sensitive documentary during last year’s film festival.

“The authorities should stop all attempts to damage the freedom of expression,” the task force composed of 70 organizations in the film industry said during a news conference in Seoul.

This is the first time in 10 years that people in the film industry have taken a collective action. They last took to streets en masse during the 2005-2006 period against the government’s decision to cut the nation’s quota for local movies in half.

Last month, local dailies, citing film industry sources, reported that a high-ranking official in the Busan city government recently met with BIFF director Lee Yong-kwan to deliver the results of a recent audit into the agency and indirectly persuaded him to resign from the post.

The city later confirmed the report, saying that it demanded that the BIFF executive committee present a new vision for the film festival and a plan to renovate the organization as the festival is to mark its 20th anniversary this year, but added that it has never urged Lee to step down.

But the local film circle has protested the move, suspecting it as a retaliatory measure against Lee’s decision to screen “The Truth Shall Not Sink with Sewol,” also known as “Diving Bell.”

The festival authorities were in a feud with the Busan city government and the Ministry of Culture, Sports and Tourism over the screening of the controversial documentary that is critical of the government’s poor response to the April 16 Sewol ferry sinking that claimed more than 300 lives.

“The recent spate of incidents will seriously hurt the independence and autonomy of the film circle,” the task force said.
“Furthermore, it’s evident that they would shrink the freedom of expression, the base of the development of the cinema industry.”

The group members said they will “not sit idle” if the authorities continue oppressing their freedom.

Founded in 1996, the BIFF has become Asia’s largest film festival.