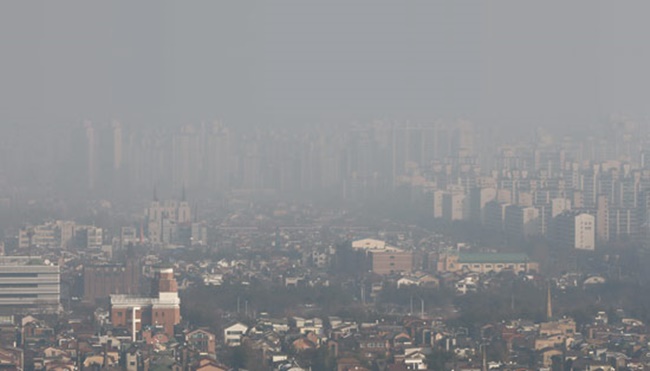 The researchers discovered the link after studying a sample of 4,851 female patients who received IVF treatment at CHA Gangnam Medical Center between 2006 and 2014. (Image: Yonhap)

When fine dust levels are 50 percent higher than average, the success rate of in vitro fertilization is reduced by 10 percent, according to a study conducted by Professor Kim Sun-young at the National Cancer Center and Professors Yoon Tae-ki and Choe Seung-ah at CHA Fertility Center.

The researchers discovered the link after studying a sample of 4,851 female patients who received IVF treatment at CHA Gangnam Medical Center between 2006 and 2014.

Using fine dust data from around 40 air quality monitoring stations in Seoul, the researchers were able to study the correlation between the success of external fertilization and particulate matter smaller than 10 micrometers, nitrogen dioxide, nitrogen monoxide, sulfur dioxide, and ozone.

“Given the fact that the success rate of external fertilization among subfertile couples is 30 percent on average, high fine dust levels could lead to a 2 to 3 percent drop, which proves the link between air pollution and pregnancy,” Kim said.

When broken down in detail, exposure to fine dust particles and nitrogen dioxide had the biggest impact on external fertilization, particularly during the stages of ovarian stimulation and embryo transfer.

While the research team says the exact reason why pregnancy is affected by air pollutants remains unclear, they predict it is similar to the effect of second-hand smoke on pregnant women.

Through second-hand smoke, toxic substances and oxidative stress can cause damage to DNA, affecting the quality of the human embryo and the environment inside the womb, making implantation more likely to fail.

“Given the findings, it seems exposure to fine dust after embryo transfer can have an impact on the success of pregnancy. In addition to policies like medical subsidies, more efforts as a country are necessary to raise awareness of environmental issues and tackle air pollution,” Yoon said.

The findings were published in the April edition of Human Reproduction.