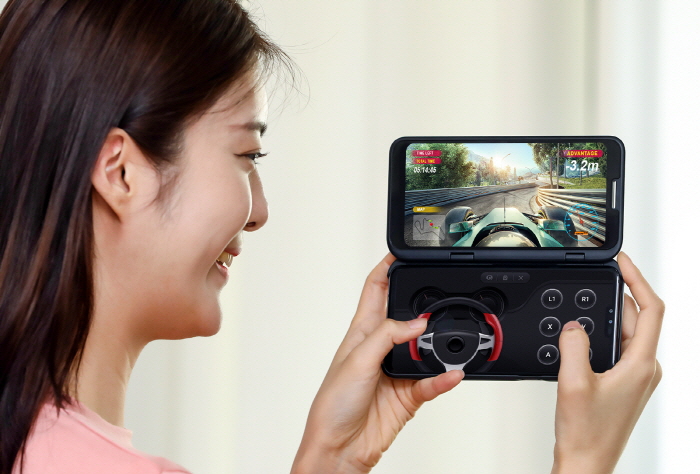 In the wake of the rising complaints, LG Electronics Inc. is considering delaying the release date of its first 5G smartphone to better ensure stable service. (image: LG Electronics)

SEOUL, Apr. 16 (Korea Bizwire) — Now that South Korea has won the much-coveted crown of the world’s “first” to launch 5G commercial service, it is time to improve the service’s quality and create lucrative business models to lead the way in the global 5G race, market watchers said Tuesday.

In the run up to the service launch, the market players sought an ultra-fast, low latency network which they claim would take the mobile experience to a new dimension and “make buffering a thing of the past.”

And it seems like the telecoms have not yet lived up to their promises.

Early adopters have increasingly expressed frustration with the 5G service over the last 10 days since its launch, citing lower-than-expected data transmission speed, limited coverage and glitches in handover between 4G and 5G networks.

Some of the complaints were widely been expected in the initial stage as the operators are still building 5G base stations and upgrading software to fix technical flaws and improve network efficiency.

“With the lack of 5G hotspots, my phone often connects to 4G and the handover procedure is not smooth,” said Kim Sung-tae, an office worker in the downtown Seoul who recently bought Galaxy S10 5G.

“If 5G does not provide quality service and speed as advertised, it means that early adopters are just paying a much higher price in vain. What’s all the fuss about 5G?”

In the wake of the complaints, LG Electronics Inc. said it will delay the release date of its first 5G smartphone to better ensure stable service with the nation’s carriers and U.S. tech giant Qualcomm, which supplied the chipset and 5G modem for the device.

The nation’s No. 2 smartphone vendor had initially planned to launch V50 ThinQ in the domestic market on April 19, but decided to adjust the schedule until the service is fully ready, the firm said.

“We will make efforts to improve 5G service and smartphone quality, ranging from software, hardware and network, by closely collaborating with Qualcomm and the nation’s mobile carriers,” LG said in a release, saying the final schedule hasn’t been confirmed yet.

Industry officials say carriers will have to heavily invest over the next few years to improve coverage across the nation and provide seamless network transition, like they did when upgrading from 3G to 4G.

They say 5G needs more investment than the previous networks as it requires denser construction of base stations to reduce their distances from devices.

“To maximize 5G service, carriers have to invest in the network with new specifications,” Kim Jang-won, an analyst at IBK Securities, said. “The carriers had planned to upgrade the network in accordance with the rise in data traffic, but it seems inevitable that they should move up the schedule to improve service.” 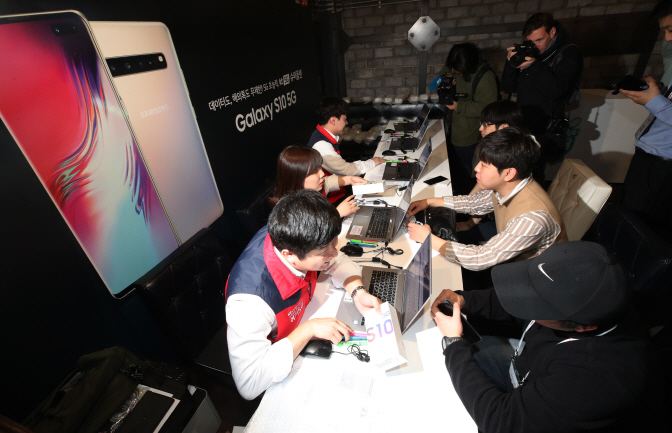 Those who have 5G smartphones will have to connect to 4G networks in areas where there is no coverage. (Yonhap)

For now, 5G is mostly available in densely populated spots in the Seoul metropolitan area and other major cities because the carriers plan to complete installation of network stations in 85 cities by the end of this year. And it is expected to take more time to establish infrastructure in every corner of the country.

This means that, in the meantime, those who have 5G smartphones will have to connect to 4G networks in areas where there is no coverage.

The latest available figures are well short of the government’s initial target of 150,000 base stations and the corresponding figure for 4G stations, with 780,000, as of March.

The data also showed that 64.4 percent of 5G base stations were located in the Seoul metropolitan area and 21.2 percent in five major cities, such as Busan.

In response to the growing complaints, top carrier SK Telecom vowed to bolster efforts to improve the quality of its 5G service.

“We have to look back and assess whether we are satisfying the needs of consumers, who have waited a long time for 5G service,” SK Telecom CEO Park Jung-ho said in a meeting with senior officials last week.

“We have to reflect consumer complaints in all areas, including coverage, speed, content and customer service.”

SK Telecom changed its earlier policy to reveal its 5G coverage map in real time on its website to improve transparency of its preparations, following the footstep of its smaller rival KT.

All of these moves come amid hope that leading the way in the global 5G race could help South Korea reap huge economic benefits in a wide range of industrial areas.

To this end, the government plans to invest more than 30 trillion won to build a 5G network throughout the entire nation over the next three years, develop related industries that include network equipment, next generation smartphones and self-driving vehicles.

“The world has already begun a fierce competition to commercialize 5G at an early date. We are only a step ahead,” President Moon Jae-in said at an event celebrating the nation’s 5G service on April 8. “Now is the time to begin our challenge to become the world’s best.”