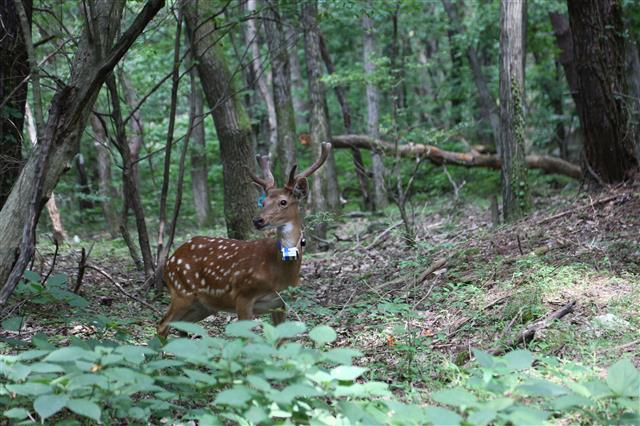 BOEUN, May 8 (Korea Bizwire) — Officials at Songrisan National Park are struggling to capture deer of a foreign species that are threatening the wildlife in the region.

The deer are descendants of a breed that was imported from Taiwan in the 1970s for the sole purpose of collecting their antlers, which are known for their medicinal value. Locally, they are known as the “Taiwanese deer.”

Through the years, the deer have either escaped from farms or were released into the wild by religious organizations, before finally settling in the forests of Songrisan.

The foreign deer are creating a problem within the national park as they are taking over the habitat of indigenous deer species due to their large body size and strength.

Moving in herds, the deer devour all local greens in sight and have become a key culprit in damaging the ecosystem. Moreover, the deer are quick and smart, making it difficult for officials to capture them.

“Because they are so fast, it’s rare to come face to face with them,” says one national park official, which is why officials have to rely on deer tracks and droppings to verify their whereabouts.

Experts say that there are over 100 Taiwanese deer living in Songrisan at present. Having numbered just 20 in the 1990s, they were able to reproduce at a rapid rate and have now become established in the region.

Park officials, after much deliberation, have decided to capture the deer in order to relocate them from the park elsewhere.

Such efforts will help remove the foreign breed from Songrisan so that the national park can regain its former ecosystem.

The deer are usually captured in the winter when food is scarce. A net is installed within their habitat and trails, luring the deer with fresh feed.

Using this method, 93 Taiwanese deer have been captured since 2010, six of which were nabbed last year.

The captured deer are released into a nearby fenced area where they are available for viewing by the public. The deer are also utilized for educational purposes and sent to zoos or welfare facilities that want them.