“Sepp Blatter’s resignation is quite disappointing and regrettable. As someone who served as FIFA’s vice president for 17 years, I feel responsible (for the scandals). I’ll listen carefully to the opinions of international football leaders before making final decision on running for FIFA presidency.”

“Blatter shouldn’t be overseeing finances or elections at FIFA, and people who got their FIFA jobs with Blatter’s help shouldn’t be running for president.” 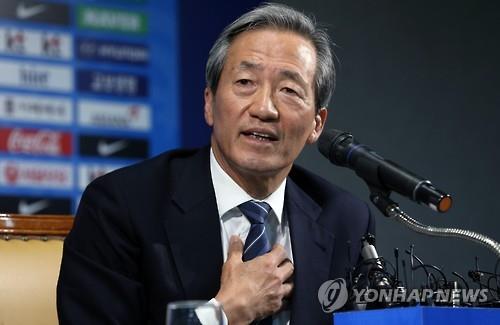 Chung, who served as FIFA’s No. 2 man from 1994 to 2011, said he will “listen carefully” to the opinions of international football leaders before making up his mind.

Earlier on Wednesday, Korean time, Blatter announced his resignation at a news conference in Zurich.

FIFA’s Audit and Compliance Committee said an election will be held sometime between December 2015 and March 2016. Blatter plans to remain in his post until that election.

He was just re-elected to his fifth mandate last weekend. The election was held two days after seven officials were arrested in Switzerland as part of a U.S. investigation into corruption at FIFA.

ABC News reported that Blatter was also being investigated by the FBI and U.S. prosecutors, though he hasn’t been publicly identified as a target of the probe.

Before the election, Chung, one of Blatter’s most vocal critics, released a statement calling on Blatter to resign. Chung said only Blatter’s departure from the top football body could save the sport from further disgrace.

Chung said last week while Blatter developed FIFA into one of the world’s most powerful sports organizations, it has also become among the most untrustworthy bodies on his watch.

Chung was critical of Blatter’s decision to stay on the job until the election, saying he shouldn’t be the one leading efforts to clean up FIFA.

South Korea came up short in its bid to host the 2022 World Cup, as Qatar won the bid. A separate investigation is underway into FIFA awarding the Middle Eastern country the 2022 tournament, as authorities are trying to determine if corruption allegations involve Qatar’s campaign.

Chung said it was “inappropriate” for him to comment on whether South Korea will be in the running if Qatar is stripped of its right to host the event.

Chung is one of the country’s most influential figures in football. He was the Korea Football Association chief from 1993 to 2009 and later became its honorary chairman. A former lawmaker and a scion of the conglomerate Hyundai Group, Chung helped bring the FIFA World Cup to South Korea for the first time in 2002, with Japan as a co-host.