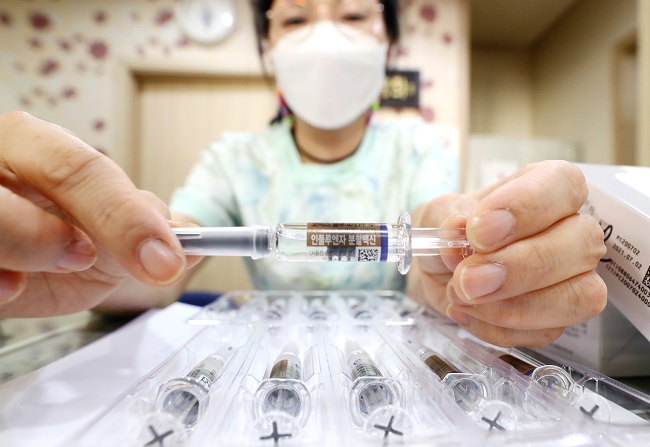 A nurse shows a flu vaccine at a clinic in Seoul on Sept. 22, 2020. The Korea Disease Control and Prevention Agency said the same day South Korea will temporarily halt its plan to offer free seasonal flu vaccines due to storage issues involving inactivated bottles. (Yonhap)

SEOUL, Jan. 28 (Korea Bizwire) – Front-line medical workers in South Korea will get the first COVID-19 vaccinations starting next month, with the general public to be inoculated during the latter half of this year, health authorities here said Thursday.

A nationwide free vaccination campaign will begin in late February, starting with medical professionals treating COVID-19 patients at hospitals and treatment centers in the wider Seoul area with AstraZeneca Plc.’s COVID-19 vaccines, according to the Korea Disease Control and Prevention Agency (KDCA).

The KDCA said the country aims for a vaccination rate of 70 percent to reach herd immunity by November, the KDCA said.

The authorities estimated around 50,000 medical workers will receive their first doses of the vaccines, followed by another 780,000 people, including patients at sanatoriums and elderly care facilities, as well as high-risk health care workers, during the first quarter.

Starting in mid-March, medical workers at general hospitals with a high number of COVID-19 patients with severe symptoms will begin vaccinations, the KDCA said.

Other front-line COVID-19 workers such as paramedics, quarantine officers and epidemiological investigators will also be subject to inoculations starting in mid-March, it said.

The combined number is expected to be around 440,000, the authorities said.

The COVID-19 vaccines will be administered at the country’s first vaccination center at the state-run National Medical Center in central Seoul, the KDCA said.

The KDCA then will build three additional vaccination sites run by general hospitals only dedicated to treating COVID-19 patients in other parts of the country,

Starting in the second quarter, people aged 65 or older, and people admitted to or working at other high-risk facilities for elders and the disabled, will get the shots, the KDCA said. The number is estimated to be around 9.4 million.

Also, a total of 380,000 health care workers working at neighborhood clinics and pharmacists across the country will also be eligible for the vaccinations starting in the second quarter, the KDCA said.

The vaccines will be provided to those suffering from chronic diseases and adults aged between 19 and 64 starting in the third quarter, they said.

Pregnant women and people under the age of 19 are excluded from the vaccination campaign to further monitor possible side effects, the authorities said. However, such people are expected to be included depending on further study, according to the KCDC.

The agency also noted that government officials working in core tasks or those who need an emergency departure due to important economic activity will also be eligible for early vaccinations following evaluation. 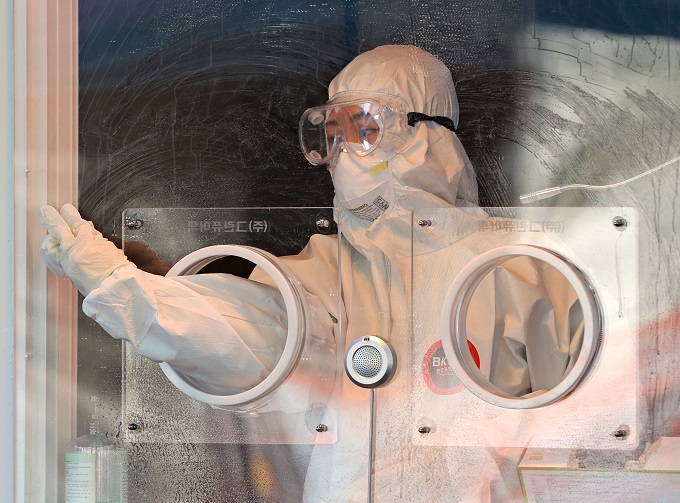 A medical worker cleans a temporary COVID-19 screening station set up in front of Seoul Station on Jan. 16, 2021. (Yonhap)

Also, the KCDA said it is close to signing a contract to secure additional new coronavirus vaccines for 20 million people from U.S. drug manufacturer Novavax Inc.

The vaccine program will be more than enough to vaccinate the country’s population of 52 million, the KDCA said.

The authorities said 1.5 million out of 10 million doses of AstraZeneca’s COVID-19 vaccines will be the first batch of vaccines to be provided in late February.

The country’s drug safety agency is currently reviewing the approval of the two full-dose regime developed by the British-Swedish bio giant.

Initially, about 50,000 doses of Pfizer vaccines were reported to be part of the first batch provided under the COVAX in February.

The KDCA said the exact amount and the schedule of the Pfizer vaccines provided through the COVAX will be decided later this month. The schedule is expected to be during the first quarter.

A local office of Pfizer earlier said it plans to submit an application for approval from the drug safety watchdog before the end of this month.

The authorities said they plan to build a total of 250 such facilities at general hospitals, gymnasiums and other kinds of government sites across the country by July.

Meanwhile, vaccines by AstraZeneca and Janssen will be provided to the people at around 10,000 private hospitals or by visiting physicians, as they require the cold chain performance quality within ocean freight.

Health authorities also said that the government will provide adequate compensation for serious side or adverse effects from the scheduled shots. The government will also cover costs for hospitals stays and other kinds of treatment costs.

The KDCA also said they will transparently make public all relevant procedures in an apparent move to soothe public’s growing safety concerns.

The authorities said they will prepare a reservation platform in March and people can choose the date and place of inoculation starting in March.