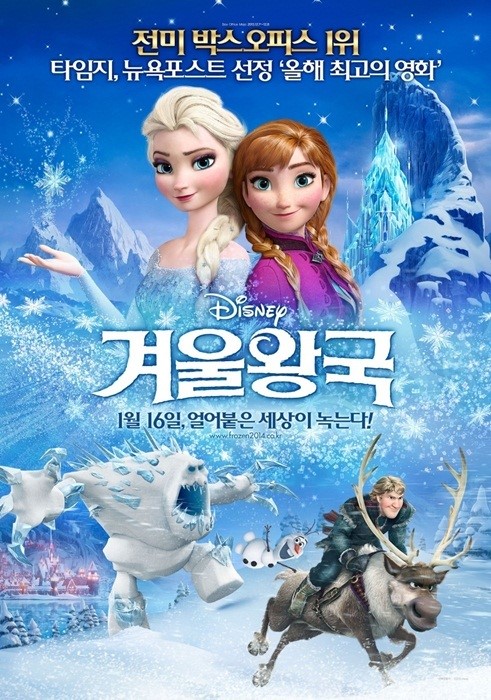 SEOUL, Korea, Feb 18 (Korea Bizwire) – Disney animation “Frozen” continues its box office hit in Korea marking 9 million viewers. Not only mentioning it has most viewers among animations, the only foreign film attracted more viewers than “Frozen” in Korea is “Avatar,” which drew some 13.3 million moviegoers in 2009.

According to the Korean Box Office Information System, the globally successful animation topped the box office attracting totally 9.03 million viewers as of February 17 since its release in the country on January 16.

With the result drawing in over 9 million viewers so far, Frozen became the most-viewed animation in Korean box office history, beating its rival DreamWorks’ “Kung Fu Panda 2,” which had some 5 million viewers.

Meanwhile, the tale of Elsa and Anna made $66.4 million in Korea, the largest-ever income in the world except the US, beating the UK with $60.9 million to date. However, China and Japan are yet to come.

Not only the animation, its soundtracks are a big hit in Korea. Especially its main title, “Let It Go” is being held at the top place in all Korean music charts for weeks with another soundtrack track “Do You Want to Build a Snowman?” It is a rare phenomenon for foreign movie soundtracks.

As the animation gets popular, tie-in books also get the eyes for Korean readers. According to Yes24, an online bookseller, its original English edition Frozen topped the best seller chart and four other books including kids’ coloring book and sticker book rank over 15th.

Film market analysts said that the success of “Frozen” comes from Disney’s marketing aiming adult viewers not like any other animations that target kids. Also, many YouTube parodies of “Frozen” scenes like “Anna’s knocking at Elsa’s door” attract people’s curiosity.

Some film analysts expected that it will exceed the 10-million mark and even beat “Avatar’s records” if the current trend keeps on.