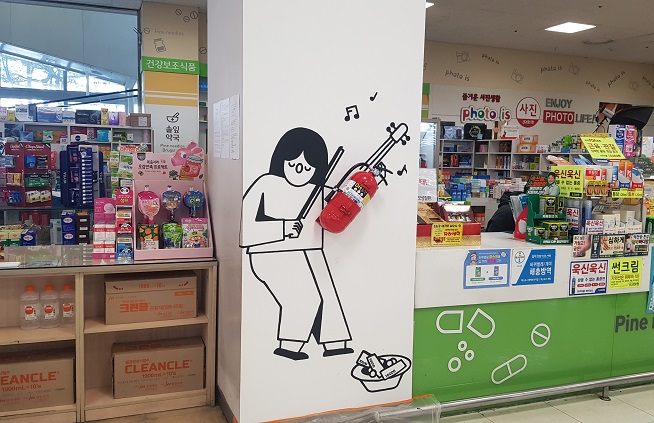 The Fire Headquarters recently announced that it will launch the nation’s first provincial-level illustration project for fire extinguishers placed in multi-use facilities.

This project aims to raise public awareness about safety as well as to console the exhausted life of citizens in the midst of the COVID-19 pandemic.

To this end, the Fire Headquarters appointed three professors of design from three universities within the province as advisory members, who exchanged views through advisory meetings.

A total of 16 students from the three universities decided to provide support by participating in graphic design and painting.

This project will be implemented on a trial basis this year, with a total of 12 sites, including large shopping malls and department stores in Chuncheon, Wonju and Gangneung being selected.

The illustrations will be painted in places that can be easily seen by many people, including the elevator entrances and counter and rest areas.

The illustrations will mainly be in black and white to clearly distinguish the position of the fire extinguishers from the surrounding environment.