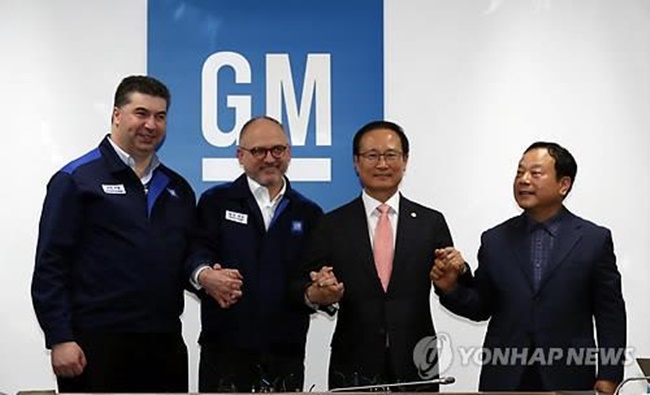 The agreement needs to be approved in a union vote. (Image: Yonhap)

SEOUL, April 23 (Korea Bizwire) – Union workers at GM Korea Co. on Monday accepted tough restructuring measures that will allow the company to stay clear of court receivership, although many hurdles still remain on the carmaker’s path toward a turnaround.

After nearly three months of negotiations, the South Korean unit of General Motors Co. and its workers reached a tentative agreement on a package of self-rescue steps that include shutting down one of GM’s four plants in Korea, cutting thousands of jobs and less favorable working conditions for the remaining 13,000 employees.

The agreement needs to be approved in a union vote.

“Ratification of the tentative agreement is critical to our viability plan and securing support of the Korean government and our shareholders, the Korea Development Bank and GM,” GM Korea President and Chief Executive Kaher Kazem said in a statement.

In the event that GM Korea posts profits as a result of the restructuring plan, the company and the union will be able to offer lump sum payments to workers, the company said.’

Under the self-help deal, GM has to allocate two new vehicles — a new sport utility vehicle to the Bupyeong plants, just west of Seoul, and a compact crossover utility vehicle to the Changwon plant, 400 km south of Seoul, — with an aim to start production at the end of 2019 and in 2022, respectively. The two cars will be for both domestic sale and export.

The state-run Korea Development Bank (KDB), whose 17 percent stake is the second-biggest in GM Korea, has committed itself to making further investments in GM Korea, it said.

GM Korea workers also made concessions — they accepted a wage freeze, forgoing bonuses and the suspension of some work benefits. In return, the company said it will offer a voluntary retirement program for the remaining 680 workers at the Gunsan plant and then discuss with the union ways to “smoothly resolve” the employment issues of those who do not wish to leave the company.

The tentative deal was hailed by the Korean government. But industry watchers and analysts remain cautious, saying GM Korea will be able to turn itself around only when GM fulfills its commitment to make fresh investments in the Korean unit and allocate new vehicles to its Korean plants.

Given the difficulties facing GM Korea’s 140,000 subcontractors, the finance ministry said Monday the KDB needs to accelerate due diligence on the carmaker and discuss measures with GM over the normalization of its Korean unit.

The KDB expects the due diligence results to come out later this week. The state lender has said a fresh loan will be extended to GM Korea depending on the results.

“GM Korea’s survival appears to depend on whether the company and its union continue to be on the same page in terms of strengthening Chevrolet vehicles’ global competitiveness and cutting costs further,” Kim Tae-nyen, vice president of the Korea Automobile Manufacturers Association, said by phone.

His view was echoed by Suh Sung-moon, who analyzed the auto sector for nearly two decades at Korea Investment & Securities Co.

He expressed concerns that the period before the two new cars are allocated to the plants is too long, as the carmaker currently has no competitive models in its lineup and, worse still, suffers a tainted image after a decade of speculation that GM could exit from Korea due to weak sales and high costs.

Reigniting worries about GM’s possible withdrawal, in February, GM announced its restructuring plan for its Korean operations. The Detroit carmaker said it will shut a plant in Gunsan, 270 km south of Seoul, by May and decide on the fate of other plants within months.

Thereafter, it proposed converting $2.7 billion debt owed to it by GM Korea into equity and offered to share an investment of $2.8 billion between GM Korea and the KDB.

In the three years through 2016, GM Korea posted 1.974 trillion won in accumulated net losses due to a lack of new models and lower demand.

Experts say that with the union accepting the terms laid down by the company, the ball is now in the court of the two biggest GM Korea shareholders.

The shareholders began talks to discuss financial support for the company immediately after the tentative deal was reached.