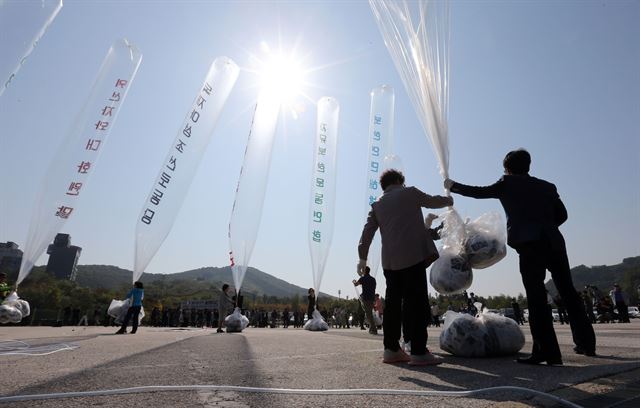 At times, conservative activists in South Korea, including some North Korean defectors, have flown anti-Pyongyang leaflets across the border by use of huge balloons. (image: Yonhap)

SEOUL, May 1 (Korea Bizwire) — The South Korean government has asked activists to refrain from sending anti-North Korea leaflets into the demilitarized zone from May 1 onwards in accordance with the North-South summit agreement.

On Monday, the Ministry of Unification stated that it had asked civic groups to stop releasing the leaflets that afternoon. The request comes after the “Panmunjom Declaration” that was signed by both parties on Friday.

The declaration states that “the two sides agreed to transform the demilitarized zone into a peace zone in a genuine sense by ceasing as of May 1 this year all hostile acts and eliminating their means, including broadcasting through loudspeakers and distribution of leaflets, in the areas along the Military Demarcation Line.”

In accordance with the declaration, the South Korean military will also start removing propaganda loudspeakers along the border with North Korea on May 1.

The release of the leaflets, however, has traditionally been seen as the work of civilian activists, and forcing a ban may be difficult as it would infringe on their freedom of expression.

The government has, therefore, asked that human rights activists comply with the agreement to which the civic groups say they will not cooperate with.

Activists like Lee Min-bok say that the leaflets are part of humanitarian efforts “to open the eyes and ears of North Korean civilians.” One human rights group said that it will release 500 units of 2-liter bottles containing rice and thumb drives into the sea northward today.

To minimize their influence on South-North relations, the civilian groups will not be releasing leaflets publicly.