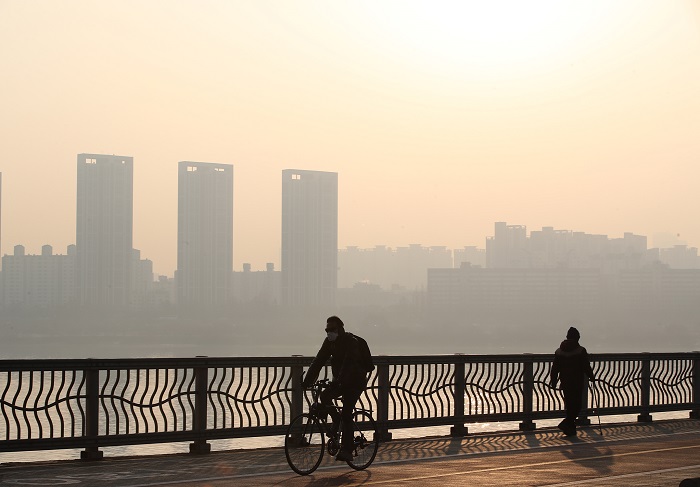 The government will gradually strengthen its dust reduction and public health measures in accordance with the four crisis levels. (Yonhap)

SEOUL, Oct. 15 (Korea Bizwire) — If ultrafine dust pollution reaches severe levels, a temporary holiday will be declared and an alternate no-driving day system will be enforced for private vehicles under the government’s new contingency plan, the Ministry of Environment said Tuesday.

The crisis level of caution will be issued when the PM 2.5 figure is in excess of 150 micrograms for over two hours and is forecast to top 75 micrograms the following day.

The crisis level of warning will be issued when PM 2.5 exceeds 200 micrograms for over two hours and is expected to exceed 150 micrograms the next day.

The highest crisis level of severe will be declared when PM 2.5 stays above 400 micrograms for over two hours and is forecast to top 200 micrograms the following day.

The government will gradually strengthen its dust reduction and public health measures in accordance with the four crisis levels.

Under the concern level, the alternate no-driving day system will be enforced for public vehicles and work hours will be reduced at construction sites.

Under the caution level, all public vehicles, except essential ones, will be banned from roads and fine dust masks will be distributed to kindergarten pupils and other vulnerable people.

In case of the warning level, private vehicles will be asked to voluntarily participate in the 2-day rotation system and public transportation services will be increased.

Under the severe level, all private vehicles will be forcibly subject to the 2-day rotation system, all schools and kindergartens will be ordered to close and a temporary holiday will be declared.

In March this year, the daily average of PM 2.5 surged close to 150 micrograms per cubic meter in Seoul, the highest levels since record-keeping began in 2015.

South Korea’s authorities have classified levels of PM 2.5 above 35 micrograms per cubic meter as “bad” and above 75 micrograms as “very bad,” while the WHO recommends keeping levels below 25 micrograms.