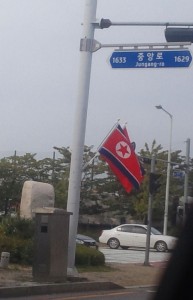 The controversy surrounding North Korean flags underscores tensions between North and South Korea are still high even in the run up to this big sporting festival. (image: North Korean flags hoisted along the streets of Goyang, north of Seoul/screenshot image of Twitter)

SEOUL, Sep. 12 (Korea Bizwire) — Goyang city , north of Seoul, announced on September 10 that the city was not responsible for raising a North Korean flag near the Goyang sports complex.

According to the city, an organizing committee of Asian Games Incheon 2014 arbitrarily hoisted national flags of 45 participants in the Asian Games including North Korea near sports complexes in 10 cities. The committee also raised the flags in Goyang city without any permission from the city government.

Some members of conservative groups have complained about the North Korean flag flying above their head, blaming the city government. The Goyang city, however, attributed the problem to the committee instead of admitting the responsibility.

In the end, the committee concluded to get rid of all flags except for a flag of Olympic Council of Asia and an emblem flag of the Asian Games.