This video commercial in which Mr. Kim appears, moved many baseball fans since this commercial was filmed right after he had been axed from a baseball club due to intense conflicts with the front-office. Kim, in the commecial ,said, “I want to play a baseball game once again.” (credit: YouTube)

SEOUL, Oct. 27 (Korea Bizwire) – Kim Sung-keun, a 71-year-old retired baseball player and a former Korea Professional Baseball League manager for 27 years, has been hired by the Hanwha Eagles to start the 2015 season as the manager again.

It has been three years and two months since he left the professional league with the SK Wyverns for five years. In a phone interview with a domestic news daily, he said, “I was deeply moved to sign again with a major league club at this age. I am grateful to my fans most of all.”

The return of the “god of baseball,” as he was often called by his cult supporters, was largely thanks to the passionate plea by the fans. After the two-year contract with Kim Eung-ryong was expired, the Hanwha Eagles was going to promote someone inside to the manager position, possibly Han Yong-deok, special advisor to the club chairman, or Lee Jeong-hoon, manager of the Eagles AAA club.

But Hanwha fans wanted someone very specific who will pull the team out of the five-year-long slump. Some of them even created a video (http://youtu.be/ExRE6UQaMu4) to petition for hiring of Kim Sung-keun. 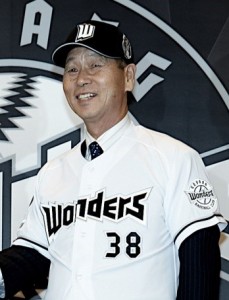 A fanatic called the head office and threatened to blow up the office unless the club brings in Mr. Kim as the manager in the next season. Finally the fans won as the club embraced their wishes and signed on the veteran to get the team out of the humiliation of being on the last place for three consecutive years.

This is in stark contrast with the travail of Sun Dong-yeol who had to resign days after fierce protest of Kia Tigers fans even though he signed with the club on October 19 at more than 1 billion won despite his failure to put the team in the playoffs for three years in a row.

Hanwha fans’ campaign to invite Mr. Kim had gone on for years. Beginning in the 2009 season, the Hanwha Eagles has been at the last place except in the 2011 season when it was ranked sixth.

Although the company signed in star managers such as Han Dae-hwa and Kim Eung-ryong at enormous sums of money, the team’s performance didn’t improve.

The amount of money the company threw in for the past four years on free agent players was 20.6 billion won (excluding bonuses). In the meantime, it built a ballpark for its AAA club in Seosan while renovating its home park in Daejeon. With the highest amount of investment for the team, the Hanwha Eagles has languished at the bottom.

That’s why the fans kept demanding to the club to sign on with Mr. Kim who was famous for playing “winning baseball” with the LG Twins and the SK Wyverns. “Now we want to win” has been the Hanwha fans’ main slogan.

Kim Sung-keun said, “Last Thursday [October 23] I got a phone call from Hanwha Eagles president Chung Seung-jin for a meeting. I met him on Saturday [October 25] and spent about 1 and a half hours before signing on the contract.”

“I feel kind of burden because of the fans’ high expectations. I know the young Hanwha players are doing well these days, thanks I am sure to the good training the former manager Kim Eung-ryong gave them,” he added.

To the question what his plans are for the next season, he answered, “I have no plans yet as I haven’t seen the players. But one thing I can say right now is the players are not trying their best and have little confidence in themselves.” Mr. Kim will attend the inauguration ceremony to be held at the Daejeon Stadium at 3 pm on the 28th.