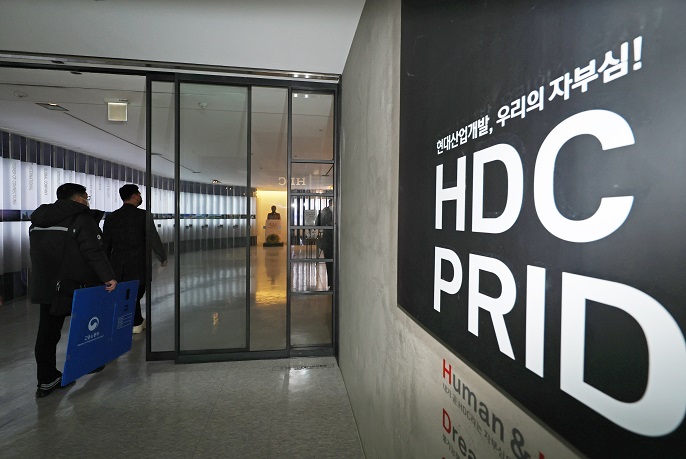 Police investigators enter the headquarters of HDC Hyundai Development Co. in Seoul on Jan. 19, 2022, in search of evidence over the partial collapse of a high-rise apartment building being built by the company in the southwestern city of Gwangju on Jan. 11 that left a worker dead and five others missing. (Yonhap)

On Jan. 11, the facade on a 39-story apartment building crumbled to the ground at its construction site in Gwangju, about 330 kilometers southwest of Seoul, killing at least one worker with five others still missing in the rubble.

Yeoksam Central IPark, located in the Seoul’s affluent Gangnam area, where jeonse houses are rarely available, had the number of units offered on jeonse jump from nine to 13 between Jan. 11 and 13.

The number of units put up for rent jumped from four to six over the same period.

The sudden surge of supply in the market is affecting the price of IPark apartments. An 84-square-meter home at Daejeon IPark City No.2 Complex in the central provincial city of Daejeon was priced between 500 and 600 million won until early this year.

This indicates that HDC’s recent series of accidents is leading homeowners to think twice about moving into the company’s apartments.

Cooperatives that have signed reconstruction and redevelopment contracts with HDC are considering terminating their contracts.