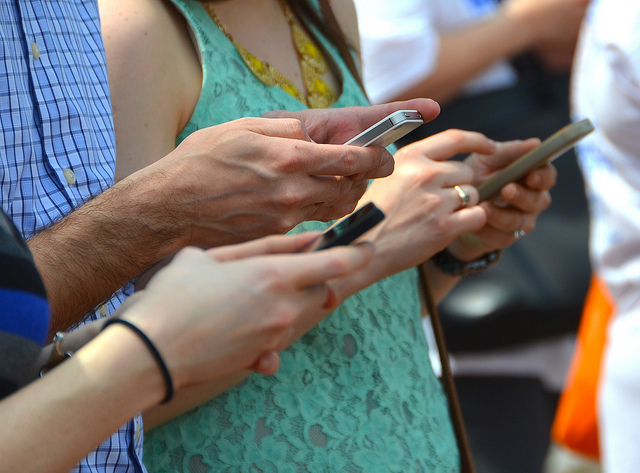 Nearly Half of Americans Turn to Digital Devices as Their Primary Method of Banking, Bank of America Survey Finds (image: afagen/ Flickr)

CHARLOTTE, N.C. June 30, 2014 (Korea Bizwire)– Almost one in two (47 percent) U.S. consumers admit they wouldn’t last a day without their smartphone, and many consider their devices more important than daily staples such as coffee and television, according to a new repcort released today by Bank of America. Of those who use their phones for banking, almost one-third (31 percent) say they log on at least once a day, and four out of five (82 percent) access their accounts at least once a week or more.

These findings are part of the inaugural Bank of America Trends in Consumer Mobility Report, a study that explores broad mobile trends and banking behaviors among adult consumers across the country who own a smartphone and have an existing banking relationship. The survey found that mobile connectivity is so critical, the smartphone falls below only the Internet and personal hygiene when ranked by importance to people’s daily lives. Ninety-one percent say their mobile phone is very important, just as important as their car (91 percent) and deodorant (91 percent); and significantly more important than television (76 percent) and coffee (60 percent).

The report also found that the youngest millennials ages 18-24 are most likely to view their mobile phones as very important (96 percent) — more so than deodorant (90 percent) and even their toothbrush (93 percent).

“Mobile phones have changed the way we live our daily lives, and that extends to our finances,” said Marc Warshawsky, senior vice president and mobile solutions executive at Bank of America. “Bank of America now has more than 15 million active mobile banking users who access their accounts on a mobile device over 165 million times per month. We’ve seen this number continue to grow and recently the number of monthly mobile banking logins surpassed online banking logins for the first time.”

The report revealed that almost two-thirds (62 percent) of consumers have at least tried mobile banking. When accessing a mobile banking app, the most common activities included monitoring account balances and statements, transferring funds and paying bills, as well as depositing checks via mobile check deposit.

But while mobile and online banking services are becoming more widely used, and in many cases are consumers’ primary method of banking, visits to bank branches also remain high: 84 percent of respondents have visited a bank branch within the past six months. This is true among all the age groups polled, with nearly the same percentage of millennials ages 18-34 (83 percent) saying they have visited a bank branch in the past six months as those ages 35 and older (85 percent).

However, just 23 percent of respondents say they complete the majority of their banking transactions at a branch. Nearly half (47 percent) turn to mobile or online as their preferred method.

Mobile check deposit on the rise

Increasingly, consumers are using their mobile banking apps to perform more sophisticated transactions, such as mobile check deposit. According to the report, nearly six in 10 (58 percent) of those surveyed have used mobile check deposit, and nearly four in 10 (38 percent) use it frequently.

Consumers who say they do not use mobile check deposit cite lack of awareness as the chief reason: more than one-third (35 percent) are either not as familiar as they would like to be or unsure how to use the feature. More than one in five surveyed (21 percent) prefer physically handing checks to a teller, and 27 percent report they just do not have any checks to deposit.

“Mobile check deposit has been one of the fastest growing digital services we offer,” said Warshawsky. “Customers appreciate the convenience of being able to complete their deposit anytime, anywhere and are depositing an average of 170 thousand checks via mobile device every day.”

Sharing too much personal information, either by talking too loudly in public (15 percent) or posting too many details on social media (15 percent) tied for second-most annoying mobile phone habits.

Only 7 percent of respondents find checking a mobile phone during meal times to be most annoying.

Since 2007, Bank of America’s Mobile Banking platform has been a key source of increased customer engagement and satisfaction with more than 15 million active users, and this number is growing by more than 200,000 customers per month.

Customers are using their mobile devices to log into their accounts over 165 million times per month, depositing more than 170,000 checks via Mobile Check Deposit every day and making more than 4 million transfers per week between their accounts and to other people’s accounts as well as to pay their bills.

In addition, Bank of America has more than 30 million Online Banking customers who log into and manage their accounts in one place – 24 hours a day, seven days a week. Bank of America customers pay more than 45 million bills a month through online billpay.

About the Bank of America Trends in Consumer Mobility Report

The Braun Research survey results conducted on behalf of Bank of America and interpretations in this release are not intended, nor implied, to be a substitute for the professional advice received from a qualified accountant, attorney or financial advisor. Always seek the advice of an accountant, attorney or financial advisor with any questions you may have regarding the decisions you undertake as a result of reviewing the information contained herein. Nothing in this report should be construed as either advice or legal opinion.

Bank of America is one of the world’s largest financial institutions, serving individual consumers, small businesses, middle-market businesses and large corporations with a full range of banking, investing, asset management and other financial and risk management products and services. The company provides unmatched convenience in the United States, serving approximately 49 million consumer and small business relationships with approximately 5,100 retail banking offices and approximately 16,200 ATMs and award-winning online banking with 30 million active users and more than 15 million mobile users. Bank of America is among the world’s leading wealth management companies and is a global leader in corporate and investment banking and trading across a broad range of asset classes, serving corporations, governments, institutions and individuals around the world. Bank of America offers industry-leading support to approximately 3 million small business owners through a suite of innovative, easy-to-use online products and services. The company serves clients through operations in more than 40 countries. Bank of America Corporation stock (NYSE:BAC) is listed on the New York Stock Exchange.

Source: Bank of America (via BusinessWire)