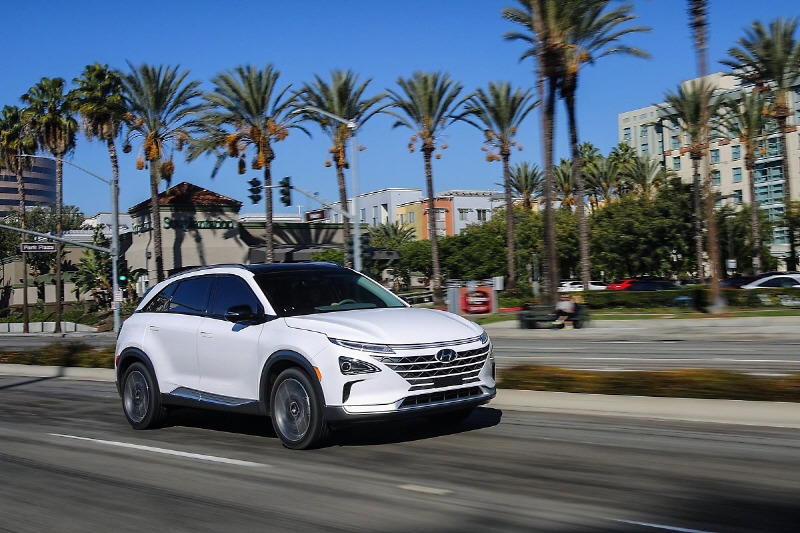 The hydrogen fuel-cell electric vehicle will go on sale domestically next month and will be exported to major markets, such as Europe, within the year. The emissions-free vehicle has an estimated driving range of 609 kilometers (378 miles) on a five-minute fill-up.

Hyundai Motor didn’t disclose the price of the vehicle but it said it takes about 40,000 won (US$37) to fully fill the vehicle’s three fuel tanks.

“The company has developed the next-generation hydrogen fuel cell safety system installed in the NEXO with an aim to satisfy strict standards required in Europe and the United States,” Park Byung-cheol, vice president at Hyundai Motor’s Recreational Vehicle Project Management Center, told reporters on the sidelines of the NEXO’s media test drive event.

To promote the sale of the NEXO, Hyundai Motor will work with the government and energy companies to establish the charging infrastructure for the next-generation vehicle, the company said in a statement.

The maker of the Sonata sedan and the Santa Fe SUV said it will increase the number of charging stations for hydrogen fuel cell electric vehicles to 36 by the end of this year, tripling from 12 at end-2017. But the total is still small compared with 100 for Japan.

The demand for electric and hydrogen-powered electric cars is not growing fast for now, but it will be big within the next 20 years, Hyundai Motor Vice Chairman Chung Eui-sun said at the Consumer Electronics Show in Las Vegas last month.

The NEXO is one of 18 eco-friendly models Hyundai Motor will introduce into global markets by 2025, having already kicked off with the Ioniq line of hybrid, plug-in and pure electric vehicle (EV) models.

It is packed with a comprehensive range of new driver assistance technologies to compete against fuel cell rivals, such as Toyota Motor Corp.’s Mirai and Honda Motor Co.’s Clarity Fuel Cell.

The advanced technologies include the Advanced Driver Assistance Systems (ADAS) and a set of driver assistance technologies, such as the Remote Smart Parking Assistant, the Lane Following System and the Highway Driving Assistant.

The remote smart parking assist system enables the NEXO to autonomously park itself and get out of a parking space with or without a driver in the car, the statement said. Companies such as BMW and Tesla have introduced similar technology.

The ADAS allows Level 2 autonomous driving, with the vehicle controlling both the steering and acceleration/deceleration, but the driver has to be in charge of changing lanes, exiting motorways, making turns and so on.

There are six levels of autonomous driving from Level 0 in which the driver is fully in charge of all aspects of driving to Level 5 in which a vehicle is completely operated by an automated driving system.

Hyundai has recently partnered with Aurora Innovation, a U.S. self-driving car startup, to commercialize the Level 4 driverless car technologies, which could be operated in smart cities by 2021.

The NEXO will be used in Aurora test programs after being installed with an autonomous driving platform. Aurora is made up of autonomous vehicle engineers from Google, Tesla and Uber.

On Monday, Hyundai held a media drive event, driving the 250 km from Seoul to PyeongChang to show off how the NEXO can easily travel long distances without refueling. PyeongChang is the host city of the 2018 Winter Olympics.