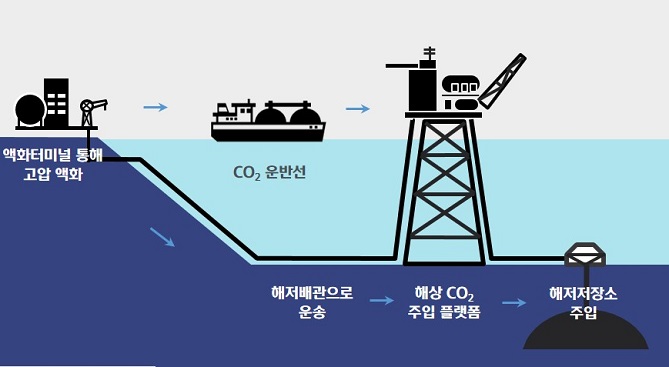 This conceptual image provided by Korea Shipbuilding & Offshore Engineering Co. (KSOE) on Aug. 31, 2021, shows the process of carbon dioxide being taken from land and stored under the ocean floor.

AIP for the platform means a certification agency has reviewed its basic design and confirmed that it meets the agency’s technical requirements and standards for safety.

The platform can store carbon dioxide that is captured and liquefied on land under the ocean floor after being transported via vessels or pipelines.

The three companies developed the platform with the aim of storing 400,000 tons of carbon dioxide annually for 30 years starting in 2025 under the ocean floor of the country’s first-ever gas field.

The offshore gas field, which is located 58 kilometers off the coast of the southeastern city of Ulsan, started producing natural gas in 2004 and will be closed at the end of this year.