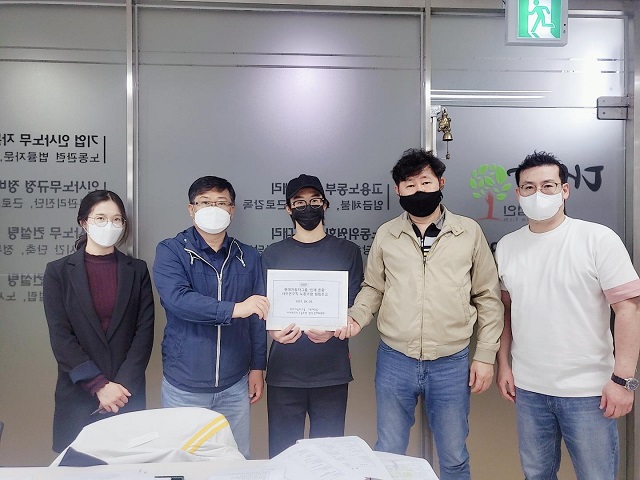 This photo, taken April 25, 2021, and provided by Daesang Labor Law Firm, shows representatives of office workers at Hyundai Motor Group after attending a meeting to set up their own union at the law firm in Seoul.

Nonmanufacturing employees at South Korea’s leading carmaker have submitted documents to the Ministry of Employment and Labor to build their own union, separately from the union of manufacturing workers, a company spokesman said over the phone.

“We felt the need to establish a union to deliver demands from employees in the non-manufacturing and R&D divisions to the company,” Lee Kun-woo, an employee of Hyundai Kefico Corp. who represents the group’s nonmanufacturing workers, said in a press conference after submitting the documents.

Currently, some 500 employees have expressed their intention to join the union. The union plans to accept irregular and contract-based workers at the group as members.

Office workers have long been sidelined in annual wage negotiations as the group has focused on demands from unionized workers at car and auto parts manufacturing plants.

In particular, office workers at the group’s main affiliates Hyundai Motor Co. and Kia Corp. were dissatisfied with the 2020 wage deals, in which their assembly line workers agreed to accept a freeze on basic pay and one-off bonuses.

Most of the office workers who want to build their own union reportedly are in their 20s and 30s, and they prefer fair compensation depending on their performance.