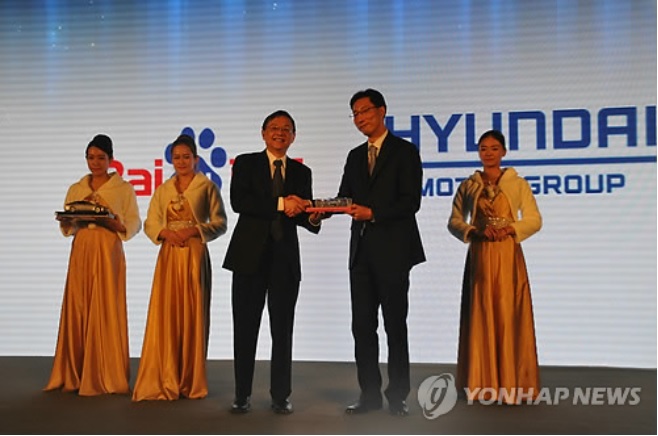 Hyundai announced that China’s top search engine would participate in efforts to sell cars that are equipped with Internet access and in-vehicle infotainment services. (image: Yonhap)

SEOUL, Jan. 28 (Korea Bizwire) — Hyundai Motor Company is teaming up with Baidu, China’s largest Internet portal, to venture into one of the most promising fields in the global automotive market: the connected car business.

The Seoul-based car manufacturer announced on January 27 that China’s top search engine would participate in efforts to sell cars that are equipped with Internet access and in-vehicle infotainment services. In China, General Motors Co. and Volkswagen AG-Audi are among the partner automakers to market cars featuring Baidu’s software.

The news was announced at an event held on Tuesday to promote CarLife, Baidu’s first software brand for the in-vehicle infotainment platform. Hyundai plans to roll out a Baidu software-compatible version of its best-selling Sonata sedan in the middle of April, said company officials. CarLife is the first platform in the connected car system in China that will provide varied information such as weather, music, navigation, along with other basic functions like voice calling.

Hyundai is scheduled to share a booth with Baidu in April at the Shanghai Motor Show, and the two companies have already signed a MOU to this end. China accounted for 23 percent of Hyundai and Kia’s total vehicle sales last year, up from 22 percent the previous year, according to the South Korean automotive company.

Hyundai’s betting on the connected car business is more concrete when you look into its strategy to stop including CD players in its cars, which was unveiled by Hyundai Motor America. This move will spare more space while also saving money, and in turn, allow the company to focus on what customers really want these days – a more powerful infotainment ecosystem, featuring a high-resolution display screen and access to up-to-date smartphone apps.

Hyundai plans to remove CD players from bestselling car models in America such as the Elantra and Sonata, and the upgraded models will hit the road armed with a more powerful infotainment system called Display Audio, built around Apple’s CarPlay and Google’s Android Auto interfaces, according to an Autonews report quoting Michael Dietz, senior group manager for the connected car at Hyundai Motor America.