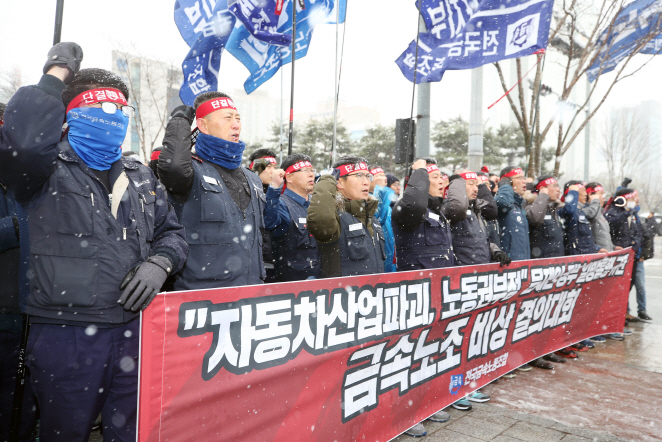 Hyundai workers hold a protest against the company’s plan to invest in a car manufacturing joint venture sought by Gwangju Metropolitan City in front of Gwangju City Hall on Jan. 31, 2019. (image: Yonhap)

The carmaker will acquire a 19 percent stake in the joint company, with Gwangju Metropolitan City holding a 21 percent stake worth 59 billion won. The automobile plant will be set up in Gwangju, 330 kilometers southwest of Seoul, the carmaker said in a statement.

“The company is participating in the joint venture as a non-management investor and will produce a mini sport utility vehicle at the plant,” Hyundai said.

The decision could allow the company to re-enter the mini car market after Hyundai halted production of the Atoz some two decades ago.

“If the city government fails to raise all necessary funds, the car manufacturing plant project will be scrapped,” he said.

Workers in the Gwangju plant will receive a starting salary of 35 million won a year if the project kicks off and begins production, the statement said.

Initially, the workers are expected to churn out a cumulative 350,000 vehicles in the plant while receiving a salary increase depending on business performances, the spokesman said.

But Hyundai’s unionized workers have strongly opposed the company’s investment, citing breach of trust and violation of an existing collective agreement. They have expressed concerns over a possible reduction in their relatively high salaries vis-a-vis Gwangju plant workers and a drop in production volume in the plants where they work.

In a statement released immediately after the decision, the union said it will consider staging an “all-out strike” at Hyundai’s domestic plants and those of its Kia affiliate, in a joint effort to protest the company’s unilateral investment decision.

Hong Nam-ki, the minister of economy and finance, said the government is pushing to come up with a job creation model similar to Hyundai Motor’s joint venture by next month so that other municipal governments can use it to create jobs.

Hong made the comments on Wednesday in a meeting with reporters in Sejong, an administrative hub located 130 kilometers southeast of Seoul.