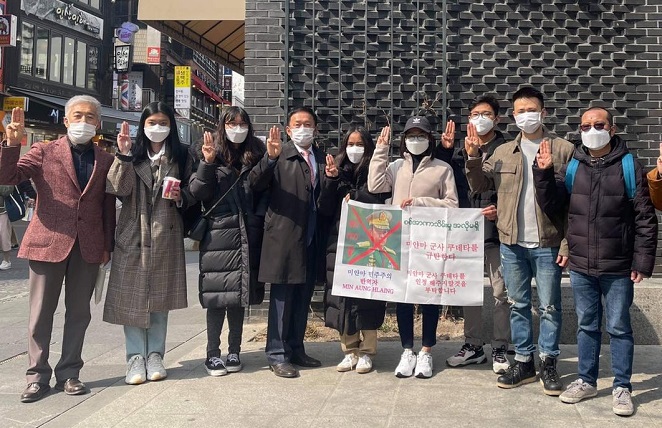 The photo provided by the Youth Solidarity in Action shows its members holding up three fingers in a gesture of resistance to the coup in Myanmar.

SEOUL, April 9 (Korea Bizwire) — A two-month long clash following a military coup d’etat between the Myanmarese military and protestors is leading many immigrants in South Korea to take action.

Hay Man Hnin, a 32-year-old man who came to South Korea three years ago and recently completed a master’s program in paedology at a local university, decided to found the Youth Solidarity in Action with 10 other members including study abroad students and workers from Myanmar.

The organization joined hands with Korean civic groups to publicize the current situation in Myanmar, and collect donations to support those fighting for democracy in Myanmar.

“I’d like to thank Koreans, who have shared similar experiences with us, for supporting our cause,” Hnin said.

The Gimpo Citizen’s Action Committee for Supporting Democracy in Myanmar, a consortium of some 50 civic groups in the region, has recently been established, with membership consisting of immigrants and citizens.

A YouTube video of a child from a multicultural family, calling for support for democracy in Myanmar, has recently gained attention.

Keum Eun-hye, a 14-year-old girl born and raised in Busan by a Korean father and a Vietnamese mother, came across a television news report on the situation in Myanmar, prompting her to post an online video in support of the protests in Myanmar with the help of her older sister.

“I’ve always been interested in Myanmar since the country is close to my cultural home, Vietnam,” Keum said.