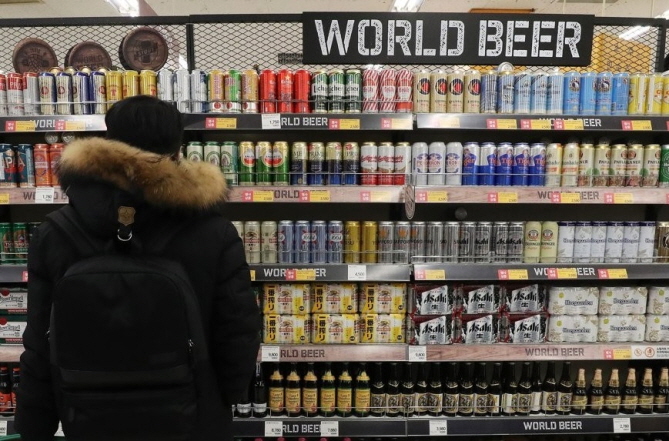 Even if the price of alcoholic beverages is different, the same level of taxes will be imposed if the type of alcohol and the amount of shipments are the same. (Yonhap)

SEOUL, Jan. 6 (Korea Bizwire) — Starting in the new year, the standard for levying liquor taxes on beer and raw rice wine has changed from a price-based “ad valorem” duty to forwarding volume-based “specific commercial duty” for the first time in 52 years.

In a related move, the National Tax Service (NTS) said Sunday that while this week’s tax reform will lower the store prices of canned beer in Korea, the tax burden of imported beer will increase.

However, for the new specific commercial duty, which is applied to beer and raw rice wine, the amount of liquor shipped is multiplied by the tax rate of each alcoholic beverage.

In other words, even if the price of alcoholic beverages is different, the same level of taxes will be imposed if the type of alcohol and the amount of shipments are the same.

The NTS expects this week’s reform of the tax code to address the “reverse discrimination” issue of imported beer, which has been constantly raised by the local manufacturing beer industry.

Under the new tax system, the price of Korean beer, which includes all manufacturing costs, sales management expenses and profit margins, was set as “taxable standard” at the time of shipment.

In the case of imported beer, on the other hand, the price at the time of the import declaration, which includes only the import price and customs duties, has become the standard for taxation.

As such, beer importers could secure enough money to cut prices and actually launch aggressive promotions such as “four cans for 10,000 won (US$8.56)” at convenience stores.

However, if both domestic and imported beers are taxed according to their shipments, this controversy over “unfair” and “reverse discrimination” is expected to be greatly reduced.

“The price competitiveness of imported beer, which was advantageous under the ad valorem duty tax system, will fall due to the new tax,” an NTS official said.