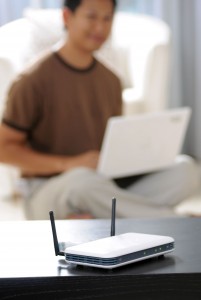 The hacker will install a harmful application to a smartphone by tampering with the DNS address of the Internet router to connect to suspicious websites. (image: Kobizmedia/ Korea Bizwire)

Embedding malignant codes through text messages is now a well-known path and many applications that shut out the codes have also been widely developed. Therefore, the ways in which vicious codes are disseminated are becoming more intelligent day by day.

The Korea Internet and Security Agency, or KISA, has announced on April 27 that intrusions to smartphones through Internet routers, which are prone to data security breaches, have been discovered recently and warned against the increasing risk among the local smartphone users in Korea.

The hacker will install a harmful application to a smartphone by tampering with the DNS address of the Internet router to connect to suspicious websites, according to KISA.

A user, when connected to the Internet through the router, will enter malignant sites against her will and be asked to download an APK install file. The user may just download the harmful file without a second thought, only being aware of the malignant code dispersed through text messages.

The bad application installed on a smartphone will not only steal private text messages and contact information saved on the device but also compromise the phone for other malignant codes to intrude, possibly causing financial losses to the user.

Such an invasion is possible because the assailant can easily meddle with the DNS of Internet routers since many of them are not password-locked and use the remote management feature.

A senior manager at KISA said, “The users should lock up their routers with passwords, preferably in combination of alphabet letters and numbers, or deactivate the ‘remote management’ feature when not in use, to prevent unauthorized access and unwanted change in settings.”

He added, “Users must not download dangerous-looking applications and most importantly should report to the agency immediately when infected.”

The agency, in its effort to eradicate the threats, has blocked malignant applications that have been discovered from its sources through Internet service providers and shared the samples to anti-virus program developers. Furthermore, it has notified companies which provide the routers that had been infringed, to remedy their security.

One thought on “Internet Routers are Used to Route Malignant Codes”