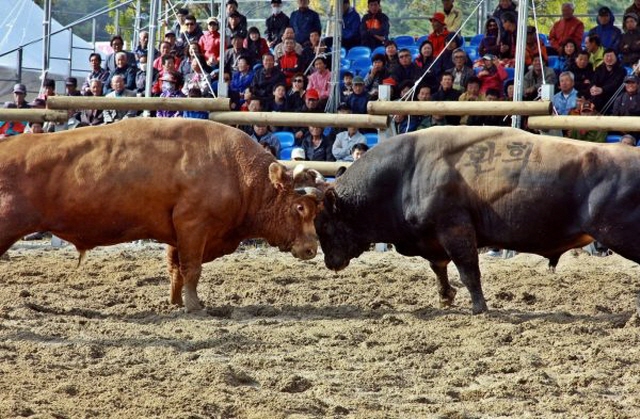 The claim that it is animal abuse and should be stopped immediately is being countered by the long-standing stance that it is a representative example of traditional culture.

Members of the Korean Association of Folklore Bull Fight and Livestock Alliance held a press conference at Jeongeup City Hall on Monday, arguing that the bullfight competition is a traditional cultural heritage with the soul and breath of their ancestors, and that claims of animal cruelty are completely groundless.

During the press conference, the officials also mentioned that there is a theory that the bullfight was held from the Three Han States 3,000 years ago, and that the Japanese tried to exterminate it because it promoted anti-Japanese spirit.

The government allows bull fights by law, unlike chicken or dog fights, and also bullfights play a role in tourism.

In response, the Korean Animal Welfare Association, an animal rights protection group, and the Green Party in Jeongeup, rebutted the bullfights as ‘clear animal cruelty’ that needs to be stopped.

What they believe is that feeding meat to herbivores to raise the size of cattle and forcing the bulls to fight after forced training itself constitutes animal cruelty.

In particular, it has been pointed out that scars on the back of the bulls need to be taken care of, which is clearly a sign of the brutality of the fights.

In order to abolish bullfighting culture, Jeongeup Green Party and the civic action group have gathered in front of the Jeongeup City Hall since March 18, and started a one-man strike calling for budget cuts for the bullfighting competition.

These groups are known to have performed one-man strikes back in 2017 to protest the construction of a bullfighting stadium.

Meanwhile, amid the controversy, Jeongeup City has been holding the National Bullfighting Festival every year in October, and trying to establish an ‘Agriculture Theme Park’ where bull fighting is possible with a 11 billion won (US$9.7 million) investment.