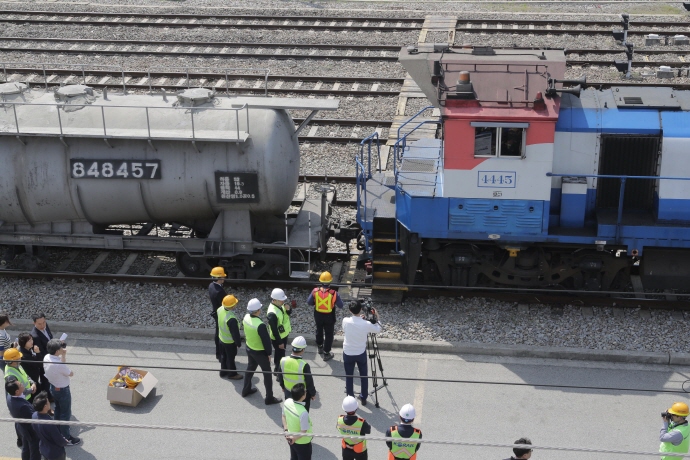 The new remote shunting system will now allow workers to move the engine locomotive without having to bring in an engine driver to connect it to or detach it from other railway vehicles. (image: Korea Railroad Corp.)

DAEJEON, May 10 (Korea Bizwire) — IT technology will now be applied to tasks connecting or detaching railway vehicles to increase safety of the workers.

South Korea’s state-run railway operator Korea Railroad Corp. (Korail) introduced the new remote-control shunting system at Daejeon Marshalling Yard on Thursday, a system which allows locomotives to be controlled from the outside of the vehicle.

The new remote shunting system will now allow workers to move the engine locomotive without having to bring in an engine driver to connect it to or detach it from other railway vehicles.

The system will enable workers to control the locomotive from the outside, through the remote control system attached to the locomotive.

Shunting workers will now move beyond traditional methods of communicating with railway drivers to connect or detach railway vehicles to control the locomotives themselves as they monitor the shunting process with their own eyes, preventing communication errors and increasing safety.

The control system installed on the engine locomotive is set to move below 25 kilometers per hour.

Tilt sensors are also attached to put the vehicle to an emergency stop when it is tilted more than 45 degrees for more than five seconds.

The US Federal Railroad Administration reported that remotely controlled shunting systems significantly reduced the number of accidents and casualties in North America and Europe.