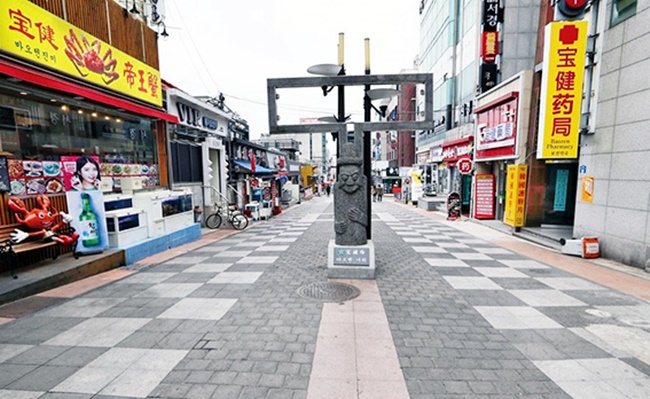 The latest move by the Jeju government comes amid a drastic drop in the number of Chinese visitors to the island since tensions grew between the two countries over the deployment of a THAAD anti-missile system on South Korea soil earlier this year. (Image: Yonhap)

JEJU, Sept. 29 (Korea Bizwire) – The Jeju government is holding a contest to look for a new name to replace what has been known as Baojian Street for the last few years, in response to the declining number of Chinese tourists to the island.

The latest move by the Jeju government comes amid a drastic drop in the number of Chinese visitors to the island since tensions grew between the two countries over the deployment of a THAAD anti-missile system on South Korea soil earlier this year.

Against this backdrop, the number of Chinese visitors to the island off the south coast of Korea dropped to 182,544 between March 15th and August 31th, down a whooping 87.7 percent compared to the same time last year, when the figure stood at nearly 1.48 million.

Baojian Street has been known as “Little China” on Jeju Island for the last few years. It earned its name six years ago, after a Chinese company of the same name sent over 14,000 employees there as part of a travel incentive program on eight occasions in 2011.

However, the decision by the Jeju government to name one of the busiest streets after a Chinese company for five years was met with criticism and controversy over its appropriateness, as well as accusations of commercialization, despite the argument that it helped attract Chinese tourists and contributed to the local economy.

As the promised five years of naming the street Baojian Street have come to an end, local officials are asking the public to rename the street amid a declining number of visitors from China over political tensions surrounding the South Korean government’s decision to deploy a U.S. anti-missile system.

Anyone with a good name can visit the official website of Jeju Island and click a button placed on the top right of the page that says ‘street naming competition.’

Submissions can be made by visiting a local community center located in Yeong neighborhood or sending an e-mail to 01062070700@korea.kr, before the end of October.

According to the Jeju government, the winner will receive a cash prize of one million won, while two runner ups will be given 500,000 won each.