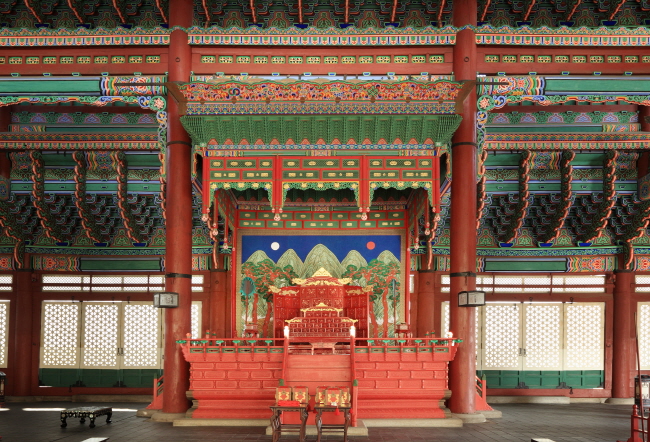 SEOUL, Aug. 7 (Korea Bizwire) — The breathtakingly ornate throne hall of Gyeongbok Palace, the grandest of the five Joseon-era royal palaces, will be opened to the public for the first time this month, the heritage administration said Wednesday.

Civilian visitors will be allowed in to savor the majestic interior of Gyeongbok’s main hall, Geunjeongjeon, during a special admission period that lasts from Aug. 21 to Sept. 21, according to the Cultural Heritage Administration.

It is the first time civilians will be let into Geunjeongjeon in central Seoul.

Geunjeongjeon, National Treasure No. 223, served as the main venue for the most important royal ceremonies and functions for the leaders of Korea’s last kingdom of Joseon, such as coronation and reception of foreign envoys.

Sitting on a spacious, stone-paved courtyard facing the palace’s main gate, the wood building is the largest of all the buildings in the palace.

The current Geunjeongjeon, which means “diligence helps governance” in English, is a restored version of its predecessor built in 1395, which was destroyed during a major war with Japan in the 16th century.

The furniture and objects that currently line the hall are recreations of the originals.

The high-ceilinged hall is characterized by the ornate royal throne in the center, the royal green and orange painting as well as the sumptuous carving of a couple of soaring dragons that symbolize royal authority.

“Royal throne halls used to be kept out of public viewing due to concerns of damage and security management needs, but (the administration) is taking gradual steps to open them up to the public so that they can see the interior,” an official at the heritage agency said.

“I hope many people would consider royal palaces as historic and cultural spaces that are standing nearby.”

During the special visit period, groups of 20 visitors will be allowed into the hall through two 20-minute guided tours every day from Wednesday to Saturday, free of charge.

Reservations are available at www.royalpalace.go.kr, and people aged 13 or higher are eligible for the tour.