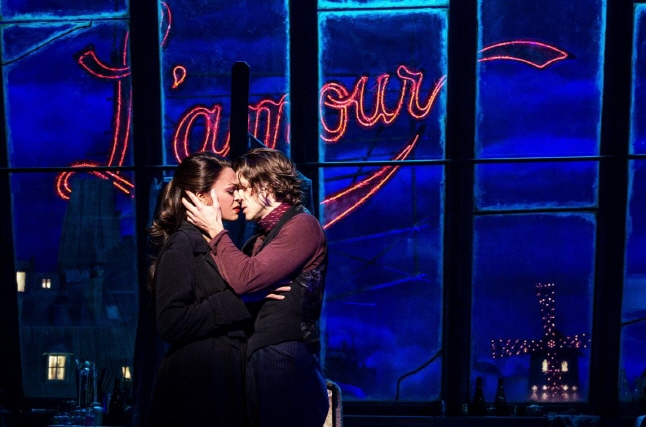 A scene from the musical “Moulin Rouge”. (image: CJ ENM)

Unlike in the past, when the primary target was the Asian market, Korean producers are now trying to knock on the doors of English-speaking nations.

Furthermore, the industry is expected to establish theaters in rural areas in South Korea and cooperate with Korean signers.

According to musical industry watchers, CJ ENM is transforming itself into a Broadway producer instead of bringing in popular musical from abroad.

CJ ENM was the first South Korean company to feature in the Broadway League.

The entertainment giant will participate as a co-producer of “Moulin Rouge”, which will open on Broadway in June, via an investment.

CJ ENM will not only preempt South Korea’s exclusive performance rights for “Moulin Rouge”, but it also has the rights to jointly produce major production performances for shows in the U.S., U.K., Australia, and Canada.

The company will use its experience from the highly successful “Kinky Boots”, which has now been running for six years. It will continue its path of challenges by taking on another project.

There are attempts to expand the K-musical industry market domestically.

Next month, one of the largest musical theaters in the country, ‘Dream Theater’, will open with 1,700 seats. It will be the first and the largest theater in Busan.

Large theaters with more than 1,500 seats are hard to find, even in Seoul, except for the one in Blue Square. The opening of a new theater can be interpreted as an effort to expand the musical market.

The local government of Busan explained that the theater will function as a new musical market and play a role in boosting the local economy.

Furthermore, considering the location of the theater, Busan, it will also function as a foundation for the Asian market.

OD Musical Company plans to expand its market with a project called ‘Popsical’, which integrates a musical and K-pop.

The company’s goal is to produce multi-talented entertainers who can perform in musicals but at the same time appear on TV.

A producer of successful musicals such as “Doctor Zhivago”, and the producer who made famous idol groups such as BEAST and BTOB will participate in the project.

As the director of the project puts it, even though the perception of musicals among South Koreans has improved, effort must still be made to improve consumer perception and produce versatile actors.

Experts suggested that these attempts are different from typical industry practices in the past, in which South Korea brought in shows from abroad or held one-off productions in Japan and China.