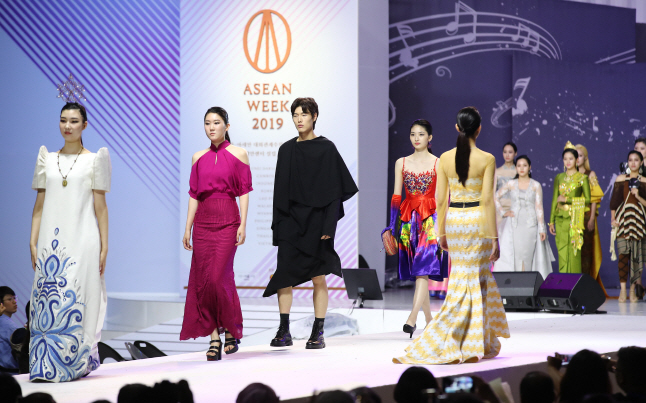 BUSAN, Nov. 22 (Korea Bizwire) — Fashion industry experts and executives from South Korea and 10 member states of the Association of Southeast Asian Nations (ASEAN) kicked off a joint fashion festival in Busan on Friday ahead of the southern port city’s hosting of the Korea-ASEAN special summit next week.

The rare event has been designed to promote friendship and mutual cooperation between South Korea and ASEAN countries in the fashion sector, particularly in celebration of the Korea-ASEAN special summit slated for Monday and Tuesday in Busan.

The main event of the fashion week is the Korea-ASEAN Special Fashion Show, which will be jointly organized by renowned designers from South Korea and 10 ASEAN countries under the theme “Eleven Becoming One” from 1 p.m. to 3 p.m. on Monday.

The fashion show will showcase a mix of Korean traditional dance and costume, called hanbok; clothes produced by young regional designers, including those from Busan; and a unique fashion performance featuring K-pop singers.

At 5 p.m. on the same day, South Korean and ASEAN fashion experts and executives will launch their joint cooperation body, dubbed the Korea-ASEAN Fashion Industry Exchange Association, in a ceremony to be held at the Grand Hotel in Busan’s Haeundae district.

During the ceremony, fashion industry executives, fashion associations and designers plan to sign the so-called ASEAN Fashion Cluster Exchange Cooperation Agreement, according to the organizers.

The fashion industry exchange association will be in charge of inviting designers, exchanges of fashion industry information and promotion of fashion equipment and fabric trades whenever fashion shows are held in South Korea and ASEAN member states in the future.