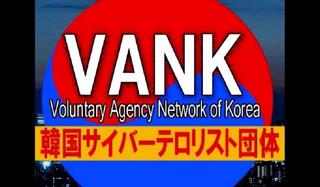 When Internet users search for the word “VANK” via Google Japan’s search engine, a “knowledge graph” appears featuring VANK’s logo and an explanation of the organization.

Under the logo which features the ying-yang symbol found at the center of the Korean flag, words that translate to “Korean cyber terrorist group” are written in Japanese.

When users click on the logo, they are directed to a page with the headline “Korean history that even illiterate people can understand.”

On this page, caricatures of former President Roh and current President Moon are depicted as explaining details of Korean history that are distorted and untrue.

Officials at VANK claim that the information readily available on Google Japan’s website is the work of Japanese netizens who are attempting to distort Korean history.

Google’s “knowledge graph” has been a feature on the search engine since 2012, sourced internally by collecting existing information online on websites such as the CIA, the World Factbook, Wikipedia and other sources.

But none of these websites currently state that VANK is a “cyber terrorist group.”

Park Gi-tae, the leader of VANK, said Japanese citizens were poking fun at past and current Korean presidents in addition to distorting facts in Korea’s history.

“I have asked Google to correct the information and will immediately take action to make this happen,” said Kim.