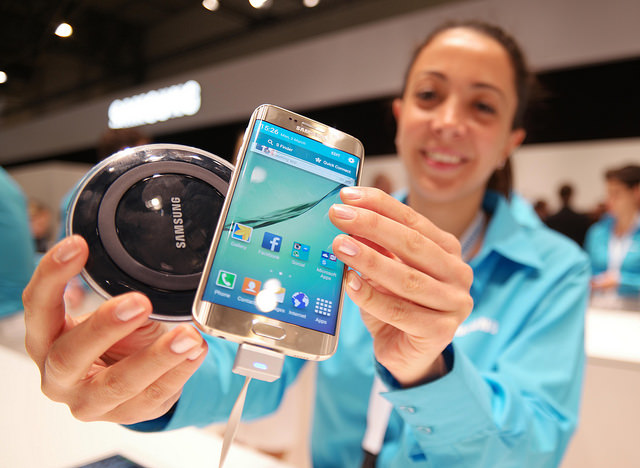 In terms of the most appealing feature of the two devices, 23.2 percent of the respondents picked the devices’ wireless charging system. (image: Samsung Electronics)

In terms of the most appealing feature of the two devices, 23.2 percent of the respondents picked the devices’ wireless charging system, while 21.5 percent were drawn to the ‘edge’ display. Lastly, 20.2 percent said that they were attracted to the 16-megapixel rear camera.

When asked about their intention to buy an S6 or S6 Edge in the next year, 35.4 percent said that they would buy an S6, while 62.9 percent preferred the S6 Edge. Respondents in their thirties and forties were especially fond of the S6 Edge.

Some of the respondents currently using LG G series devices and Apple iPhones also indicated an intention to buy one of the new phones, as 38.4 percent of current G series phone users and 23.5 percent of iPhone users said they would like to purchase one of the new Samsung models.

SK Telecom was the favored mobile carrier to purchase an S6 or S6 Edge from, as 58.8 percent said that they would choose the company for its diverse membership benefits and rate plans.